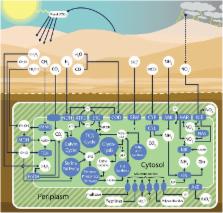 Previous surveys of very dry Atacama Desert mineral soils have consistently revealed sparse communities of non-photosynthetic microbes. The functional nature of these microorganisms remains debatable given the harshness of the environment and low levels of biomass and diversity. The aim of this study was to gain an understanding of the phylogenetic community structure and metabolic potential of a low-diversity mineral soil metagenome that was collected from a high-elevation Atacama Desert volcano debris field. We pooled DNA extractions from over 15 g of volcanic material, and using whole genome shotgun sequencing, observed only 75–78 total 16S rRNA gene OTUs 3%. The phylogenetic structure of this community is significantly under dispersed, with actinobacterial lineages making up 97.9–98.6% of the 16S rRNA genes, suggesting a high degree of environmental selection. Due to this low diversity and uneven community composition, we assembled and analyzed the metabolic pathways of the most abundant genome, a Pseudonocardia sp. (56–72% of total 16S genes). Our assembly and binning efforts yielded almost 4.9 Mb of Pseudonocardia sp. contigs, which accounts for an estimated 99.3% of its non-repetitive genomic content. This genome contains a limited array of carbohydrate catabolic pathways, but encodes for CO 2 fixation via the Calvin cycle. The genome also encodes complete pathways for the catabolism of various trace gases (H 2, CO and several organic C1 compounds) and the assimilation of ammonia and nitrate. We compared genomic content among related Pseudonocardia spp. and estimated rates of non-synonymous and synonymous nucleic acid substitutions between protein coding homologs. Collectively, these comparative analyses suggest that the community structure and various functional genes have undergone strong selection in the nutrient poor desert mineral soils and high-elevation atmospheric conditions.

Federico Abascal,  Rafael Zardoya,  Maximilian J Telford (2010)
We present TranslatorX, a web server designed to align protein-coding nucleotide sequences based on their corresponding amino acid translations. Many comparisons between biological sequences (nucleic acids and proteins) involve the construction of multiple alignments. Alignments represent a statement regarding the homology between individual nucleotides or amino acids within homologous genes. As protein-coding DNA sequences evolve as triplets of nucleotides (codons) and it is known that sequence similarity degrades more rapidly at the DNA than at the amino acid level, alignments are generally more accurate when based on amino acids than on their corresponding nucleotides. TranslatorX novelties include: (i) use of all documented genetic codes and the possibility of assigning different genetic codes for each sequence; (ii) a battery of different multiple alignment programs; (iii) translation of ambiguous codons when possible; (iv) an innovative criterion to clean nucleotide alignments with GBlocks based on protein information; and (v) a rich output, including Jalview-powered graphical visualization of the alignments, codon-based alignments coloured according to the corresponding amino acids, measures of compositional bias and first, second and third codon position specific alignments. The TranslatorX server is freely available at http://translatorx.co.uk.

N Fierer,  J W Leff,  B. J. Adams … (2012)
For centuries ecologists have studied how the diversity and functional traits of plant and animal communities vary across biomes. In contrast, we have only just begun exploring similar questions for soil microbial communities despite soil microbes being the dominant engines of biogeochemical cycles and a major pool of living biomass in terrestrial ecosystems. We used metagenomic sequencing to compare the composition and functional attributes of 16 soil microbial communities collected from cold deserts, hot deserts, forests, grasslands, and tundra. Those communities found in plant-free cold desert soils typically had the lowest levels of functional diversity (diversity of protein-coding gene categories) and the lowest levels of phylogenetic and taxonomic diversity. Across all soils, functional beta diversity was strongly correlated with taxonomic and phylogenetic beta diversity; the desert microbial communities were clearly distinct from the nondesert communities regardless of the metric used. The desert communities had higher relative abundances of genes associated with osmoregulation and dormancy, but lower relative abundances of genes associated with nutrient cycling and the catabolism of plant-derived organic compounds. Antibiotic resistance genes were consistently threefold less abundant in the desert soils than in the nondesert soils, suggesting that abiotic conditions, not competitive interactions, are more important in shaping the desert microbial communities. As the most comprehensive survey of soil taxonomic, phylogenetic, and functional diversity to date, this study demonstrates that metagenomic approaches can be used to build a predictive understanding of how microbial diversity and function vary across terrestrial biomes.

R Edwards,  Matthew Haynes,  Linlin Li … (2008)
Microbial activities shape the biogeochemistry of the planet and macroorganism health. Determining the metabolic processes performed by microbes is important both for understanding and for manipulating ecosystems (for example, disruption of key processes that lead to disease, conservation of environmental services, and so on). Describing microbial function is hampered by the inability to culture most microbes and by high levels of genomic plasticity. Metagenomic approaches analyse microbial communities to determine the metabolic processes that are important for growth and survival in any given environment. Here we conduct a metagenomic comparison of almost 15 million sequences from 45 distinct microbiomes and, for the first time, 42 distinct viromes and show that there are strongly discriminatory metabolic profiles across environments. Most of the functional diversity was maintained in all of the communities, but the relative occurrence of metabolisms varied, and the differences between metagenomes predicted the biogeochemical conditions of each environment. The magnitude of the microbial metabolic capabilities encoded by the viromes was extensive, suggesting that they serve as a repository for storing and sharing genes among their microbial hosts and influence global evolutionary and metabolic processes.

This article was submitted to Terrestrial Microbiology, a section of the journal Frontiers in Microbiology.