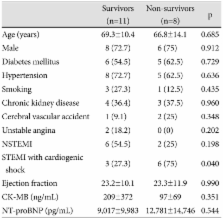 Publisher: The Korean Society of Cardiology

Percutaneous cardiopulmonary support (PCPS) has proven to be a valuable technique in high-risk coronary patients undergoing percutaneous coronary intervention (PCI). However, there have been few studies on PCI associated with PCPS in Korea. We summarized our experience with PCPS-supported PCI.

We retrospectively reviewed 19 patients with PCPS-supported PCI between August 2005 and June 2009. PCPS was used as an elective procedure for 10 patients with at least two of the following conditions: left-ventricular ejection fraction <35%, target vessel(s) supplying more than 50% of the viable myocardium, high risk surgical patients, and patients who refused coronary bypass surgery. In the remaining 9 patients PCPS was used as an emergency procedure, to stabilize and even resuscitate patients with acute myocardial infarction and cardiogenic shock, in order to attempt urgent PCI.

Among the 19 patients who were treated with PCPS-supported PCI, 11 (57.9%) survived and 8 (42.1%) patients did not. ST elevation myocardial infarction with cardiogenic shock was more prevalent in the non-survivors than in the survivors (75% vs. 27.3%, p=0.04). The elective PCPS-supported PCI was practiced more frequently in the survivors than in the non-survivors (72.7% vs. 25%, p=0.04). In the analysis of the event-free survival curve between elective and emergency procedures, there was a significant difference in the survival rate (p=0.025). Among the survivors there were more patients with multi-vessel disease, but a lower Thrombolysis in Myocardial Infarction grade in the culprit lesions was detected in the non-survivors, before PCI. Although we studied high-risk patients, there was no procedure-related mortality.

Our experience suggests that PCPS may be helpful in high risk patients treated with PCI, especially in elective cases. More aggressive and larger scale studies of PCPS should follow.

Silvana Marasco,  George Lukas,  Michael McDonald … (2008)
Mechanical circulatory support has evolved markedly over recent years. ECMO (extra corporeal membrane oxygenation) is instituted for the management of life threatening pulmonary or cardiac failure (or both), when no other form of treatment has been or is likely to be successful. Most commonly, it is instituted in an emergency or urgent situation after failure of other treatment modalities. It is used as temporary support, usually awaiting recovery of organs, or can be used as a bridge to a more permanent device or cardiac transplantation. ECMO can be deployed in a veno-arterial configuration (either peripheral or central cannulation) for the treatment of cardiogenic shock. This is usually seen post-cardiotomy, post-heart transplant and in severe cardiac failure due to almost any other cause (e.g. cardiomyopathy, myocarditis, acute coronary syndrome with cardiogenic shock). Veno-venous ECMO is used for respiratory failure and usually involves peripheral cannulation using the femoral veins+/-internal jugular vein if required. The indications for veno-venous ECMO are respiratory failure, most commonly due to adult respiratory distress syndrome (ARDS), pneumonia, trauma or primary graft failure following lung transplantation. ECMO is also used for neonatal and paediatric respiratory support. Its use in premature neonates is the mainstay of treatment for immature lungs and insufficient surfactant. In this review, the technical aspects of ECMO cannulation, maintenance and weaning are outlined. Complication rates and outcomes are reviewed and our experience at The Epworth Hospital is summarized.

Fayaz Shawl,  Michael Domanski,  Tomas Hernandez … (1989)
Emergency percutaneous cardiopulmonary bypass support was instituted in 8 consecutive patients, ages 42 to 80 years, in cardiogenic shock for 30 to 180 minutes (mean 106) due to acute myocardial infarction. The location of the infarction was inferior in 4, anterior in 3 and lateral in 1. Four patients had a history of prior myocardial infarction. Two patients were in cardiac arrest; the remaining 6 had a mean blood pressure of 43 to 55 mm Hg before the bypass. Five had pulmonary capillary Wedge pressure greater than or equal to 20 mm Hg. One patient, with a right ventricular infarction, had a pulmonary wedge pressure of 10 mm Hg. Percutaneous insertion of 20Fr cannulas was carried out. Flow rates of 3.2 to 5.2 liters/min were achieved. Two patients in cardiac arrest regained consciousness while still in ventricular fibrillation or asystole. Left ventricular ejection fraction ranged from 17 to 40% (mean 32). One patient had left main, 4 had multivessel, and 4 had 1-vessel coronary disease. Seven patients had successful angioplasty of 15 of 16 lesions attempted, with all infarct-related vessels successfully dilated. One patient had lesions unsuitable for either bypass or angioplasty and died. Need for blood transfusion was the most frequent complication. One patient required surgical repair of the femoral artery. All 7 patients are alive at a mean follow-up of 8.2 months. It is concluded that cardiopulmonary bypass can be safely instituted percutaneously, hemodynamically stabilize patients in cardiogenic shock and facilitate emergency complex coronary angioplasty, which may be life-saving.