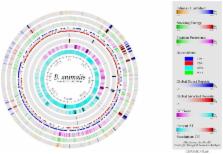 This review presents selected data on the probiotic strain Bifidobacterium animalis subsp. lactis BB-12 ® (BB-12 ®), which is the world’s most documented probiotic Bifidobacterium. It is described in more than 300 scientific publications out of which more than 130 are publications of human clinical studies. The complete genome sequence of BB-12 ® has been determined and published. BB-12 ® originates from Chr. Hansen’s collection of dairy cultures and has high stability in foods and as freeze dried powders. Strain characteristics and mechanisms of BB-12 ® have been established through extensive in vitro testing. BB-12 ® exhibits excellent gastric acid and bile tolerance; it contains bile salt hydrolase, and has strong mucus adherence properties, all valuable probiotic characteristics. Pathogen inhibition, barrier function enhancement, and immune interactions are mechanisms that all have been demonstrated for BB-12 ®. BB-12 ® has proven its beneficial health effect in numerous clinical studies within gastrointestinal health and immune function. Clinical studies have demonstrated survival of BB-12 ® through the gastrointestinal tract and BB-12 ® has been shown to support a healthy gastrointestinal microbiota. Furthermore, BB-12 ® has been shown to improve bowel function, to have a protective effect against diarrhea, and to reduce side effects of antibiotic treatment, such as antibiotic-associated diarrhea. In terms of immune function, clinical studies have shown that BB-12 ® increases the body’s resistance to common respiratory infections as well as reduces the incidence of acute respiratory tract infections.

The Lactobacillus and Bifidobacterium microflora of the human intestine: composition and succession.

David Reuter (2001)
Lactobacillus and bifidobacterial cultures are increasingly used as probiotics in pharmaceuticals and in foods. The selection of strains is performed often for technological rather than for microecological reasons. Detailed reports about species and strains composition of these microorganisms in the intestinal microflora of man are rare. Our investigations were performed with samples originating from infants and adults, taken from faeces and from upper sections of the intestinal tract including mouth and stomach, and from caecum and colon. Post mortem cases as well as test subjects under physiological conditions were analyzed using an automatic capsule system sampling at defined times in different parts of the intestinal tract. The fate of selected strains after oral intake was studied, too. Furthermore, influences of the microflora originating from food were considered. The identification of autochthonous (indigenous) and allochthonous (transient) species could be achieved with descriptions of new species in the genera Lactobacillus and Bifidobacterium. L. gasseri and L. reuteri proved to be predominant autochthonous Lactobacillus species in infants as well as in adults. Both species were occasionally present even in the stomach. This was also the case with an anaerobic lactic acid bacterium, previously named Catenabacterium catenaforme, later classified as L. ruminis, a non-motile variant of this species. The bifidobacterial microflora differed in composition between infants and adults and in different stages of the host's life. Up to 5 species or special strains of bifidobacteria could be present in different, individually fixed, combinations. Species typical for infants were B. bifidum, B. infantis, B. breve, and B. parvulorum. Typical for adults were 4 different variants of B. adolescentis. B. bifidum and B. longum could often be found in both groups, but in lower numbers. B. longum showed some oxygen tolerance whereas B. bifidum and B. adolescentis required strict anaerobic and fastidious conditions for cultivation. The autochthonous Lactobacillus and Bifidobacterium microflora in man will remain stable life-long. With lactobacilli, however, some successions may be caused by transient species derived from food or from the oral cavity, thus giving the impression of an altered microflora. Nevertheless L. gasseri, L. reuteri, L. ruminis, and to some degree, L. salivarius, may be present as autochthonous species all of the time. With bifidobacteria, a decreasing tendency in counts and in multiple composition in elderly people exists. Furthermore, this microflora is also influenced by consumption habits, which are probably caused by geographical circumstances.