Inhibition of cardiac Kv1.5 potassium current by the anesthetic midazolam: mode of action 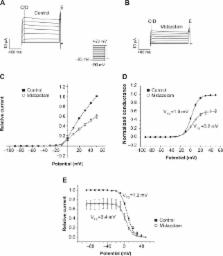 Midazolam is a short-acting benzodiazepine that is widely used in anesthesia. Despite its widespread clinical use, detailed information about cardiac side effects of midazolam is largely lacking. Using the double-electrode voltage clamp technique, we studied pharmacological effects of midazolam on heterologously expressed Kv1.5 channels underlying atrial repolarizing current I Kur. Midazolam dose-dependently inhibited Kv1.5 current, yielding an IC 50 of 17 μM in an HEK cell line and an IC 50 of 104 μM in Xenopus oocytes. We further showed that midazolam did not affect the half-maximal activation voltage of Kv1.5 channels. However, a small negative shift of the inactivation curve could be observed. Midazolam acted as a typical open-channel inhibitor with rapid onset of block and without frequency dependence of block. Taken together, midazolam is an open channel inhibitor of cardiac Kv1.5 channels. These data add to the current understanding of the pharmacological profile of midazolam.

David J. Greenblatt,  J G Reves,  H Vinik … (1985)
Midazolam is an imidazobenzodiazepine with unique properties when compared with other benzodiazepines. It is water soluble in its acid formulation but is highly lipid soluble in vivo. Midazolam also has a relatively rapid onset of action and high metabolic clearance when compared with other benzodiazepines. The drug produces reliable hypnosis, amnesia, and antianxiety effects when administered orally, intramuscularly, or intravenously. There are many uses for midazolam in the perioperative period including premedication, anesthesia induction and maintenance, and sedation for diagnostic and therapeutic procedures. Midazolam is preferable to diazepam in many clinical situations because of its rapid, nonpainful induction and lack of venous irritation. Compared with thiopental, midazolam is not as rapid acting nor predictable in hypnotic effect. It will not replace thiopental as an induction agent. Advantages of midazolam over thiopental are those of the more versatile pharmacologic properties of a benzodiazepine compared with a barbiturate such as amnestic and anxiolytic properties. Midazolam should be a useful addition to the formulary.

Jeanne Nerbonne (2000)
In the mammalian heart, Ca2+-independent, depolarization-activated potassium (K+) currents contribute importantly to shaping the waveforms of action potentials, and several distinct types of voltage-gated K+ currents that subserve this role have been characterized. In most cardiac cells, transient outward currents, Ito,f and/or Ito,s, and several components of delayed reactivation, including IKr, IKs, IKur and IK,slow, are expressed. Nevertheless, there are species, as well as cell-type and regional, differences in the expression patterns of these currents, and these differences are manifested as variations in action potential waveforms. A large number of voltage-gated K+ channel pore-forming (alpha) and accessory (beta, minK, MiRP) subunits have been cloned from or shown to be expressed in heart, and a variety of experimental approaches are being exploited in vitro and in vivo to define the relationship(s) between these subunits and functional voltage-gated cardiac K+ channels. Considerable progress has been made in defining these relationships recently, and it is now clear that distinct molecular entities underlie the various electrophysiologically distinct repolarizing K+ currents (i.e. Ito,f, Ito,s, IKr, IKs, IKur, IK,slow, etc.) in myocyardial cells.

Role of IKur in controlling action potential shape and contractility in the human atrium: influence of chronic atrial fibrillation.

Erich Wettwer,  O Hála,  Torsten Christ … (2004)
The ultrarapid outward current I(Kur) is a major repolarizing current in human atrium and a potential target for treating atrial arrhythmias. The effects of selective block of I(Kur) by low concentrations of 4-aminopyridine or the biphenyl derivative AVE 0118 were investigated on right atrial action potentials (APs) in trabeculae from patients in sinus rhythm (SR) or chronic atrial fibrillation (AF). AP duration at 90% repolarization (APD90) was shorter in AF than in SR (300+/-16 ms, n=6, versus 414+/-10 ms, n=15), whereas APD20 was longer (35+/-9 ms in AF versus 5+/-2 ms in SR, P<0.05). 4-Aminopyridine (5 micromol/L) elevated the plateau to more positive potentials from -21+/-3 to -6+/-3 mV in SR and 0+/-3 to +12+/-3 mV in AF. 4-Aminopyridine reversibly shortened APD90 from 414+/-10 to 350+/-10 ms in SR but prolonged APD90 from 300+/-16 to 320+/-13 ms in AF. Similar results were obtained with AVE 0118 (6 micromol/L). Computer simulations of I(Kur) block in human atrial APs predicted secondary increases in I(Ca,L) and in the outward rectifiers I(Kr) and I(Ks), with smaller changes in AF than SR. The indirect increase in I(Ca,L) was supported by a positive inotropic effect of 4-aminopyridine without direct effects on I(Ca,L) in atrial but not ventricular preparations. In accordance with the model predictions, block of I(Kr) with E-4031 converted APD shortening effects of I(Kur) block in SR into AP prolongation. Whether inhibition of I(Kur) prolongs or shortens APD depends on the disease status of the atria and is determined by the level of electrical remodeling.