Phenotypic flexibility as a measure of health: the optimal nutritional stress response test 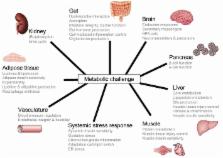 Nutrition research is struggling to demonstrate beneficial health effects, since nutritional effects are often subtle and long term. Health has been redefined as the ability of our body to cope with daily-life challenges. Physiology acts as a well-orchestrated machinery to adapt to the continuously changing environment. We term this adaptive capacity “phenotypic flexibility.” The phenotypic flexibility concept implies that health can be measured by the ability to adapt to conditions of temporary stress, such as physical exercise, infections or mental stress, in a healthy manner. This may offer a more sensitive way to assess changes in health status of healthy subjects. Here, we performed a systematic review of 61 studies applying different nutritional stress tests to quantify health and nutritional health effects, with the objective to define an optimal nutritional stress test that has the potential to be adopted as the golden standard in nutrition research. To acknowledge the multi-target role of nutrition, a relevant subset of 50 processes that govern optimal health, with high relevance to diet, was used to define phenotypic flexibility. Subsequently, we assessed the response of biomarkers related to this subset of processes to the different challenge tests. Based on the obtained insights, we propose a nutritional stress test composed of a high-fat, high-caloric drink, containing 60 g palm olein, 75 g glucose and 20 g dairy protein in a total volume of 400 ml. The use of such a standardized nutritional challenge test in intervention studies is expected to demonstrate subtle improvements of phenotypic flexibility, thereby enabling substantiation of nutritional health effects.

Jane Yang,  R Vasan,  G. Lewis … (2011)
Dyslipidemia is an independent risk factor for type 2 diabetes, although exactly which of the many plasma lipids contribute to this remains unclear. We therefore investigated whether lipid profiling can inform diabetes prediction by performing liquid chromatography/mass spectrometry-based lipid profiling in 189 individuals who developed type 2 diabetes and 189 matched disease-free individuals, with over 12 years of follow up in the Framingham Heart Study. We found that lipids of lower carbon number and double bond content were associated with an increased risk of diabetes, whereas lipids of higher carbon number and double bond content were associated with decreased risk. This pattern was strongest for triacylglycerols (TAGs) and persisted after multivariable adjustment for age, sex, BMI, fasting glucose, fasting insulin, total triglycerides, and HDL cholesterol. A combination of 2 TAGs further improved diabetes prediction. To explore potential mechanisms that modulate the distribution of plasma lipids, we performed lipid profiling during oral glucose tolerance testing, pharmacologic interventions, and acute exercise testing. Levels of TAGs associated with increased risk for diabetes decreased in response to insulin action and were elevated in the setting of insulin resistance. Conversely, levels of TAGs associated with decreased diabetes risk rose in response to insulin and were poorly correlated with insulin resistance. These studies identify a relationship between lipid acyl chain content and diabetes risk and demonstrate how lipid profiling could aid in clinical risk assessment.

How should we define health?

Francesco Nappo,  Katherine Esposito,  Michele Cioffi … (2002)
To compare the effect of a high-fat meal and a high-carbohydrate meal (pizza), with and without antioxidant vitamins, on endothelial activation in healthy subjects and in patients with type 2 diabetes mellitus. The postprandial state is becoming increasingly acknowledged to affect some early events of atherogenesis. In a randomized, observer-blinded, crossover study, 20 newly diagnosed type 2 diabetic patients and 20 age- and gender-matched healthy subjects received two meals at one-week intervals: a high-fat meal (760 calories) and an isoenergetic high-carbohydrate meal (non-cheese pizza). In all subjects, the same meals were repeated immediately following ingestion of vitamin E, 800 IU, and ascorbic acid, 1,000 mg. In normal subjects, the high-fat meal increased the plasma levels of tumor necrosis factor-alpha (TNF-alpha), interleukin-6 (IL-6), intercellular adhesion molecule-1 (ICAM-1) and vascular cell adhesion molecule-1 (VCAM-1), which were prevented by vitamins. No change in these parameters occurred after pizza ingestion or pizza ingestion with vitamins. In diabetic patients, basal concentrations of glucose, cytokines and adhesion molecules were significantly higher than in nondiabetic controls. Both meals significantly increased cytokine and adhesion molecule levels, but the increase was more sustained following the high-fat meal. There was no significant change from baseline when vitamin supplementation accompanied each meal. There was a relationship between changes in serum triglycerides and changes in TNF-alpha (r = 0.39, p < 0.01), IL-6 (r = 0.28, p < 0.05) and VCAM-1 (r = 0.25, p < 0.05), and between changes in plasma glucose and changes in IL-6 (r = 0.36, p < 0.01) and ICAM-1 (r = 0.31, p < 0.02). An oxidative mechanism mediates endothelial activation induced by post-meal hyperlipidemia and hyperglycemia.

Open AccessThis article is distributed under the terms of the Creative Commons Attribution 4.0 International License (http://creativecommons.org/licenses/by/4.0/), which permits unrestricted use, distribution, and reproduction in any medium, provided you give appropriate credit to the original author(s) and the source, provide a link to the Creative Commons license, and indicate if changes were made.