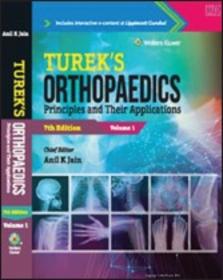 ScienceOpenPublisherPMC
Bookmark
There is no author summary for this article yet. Authors can add summaries to their articles on ScienceOpen to make them more accessible to a non-specialist audience.
A textbook should introduce biological basis of bone and joint diseases and algorithm of diagnosis and treatment to the readers. It should encompass the evolution of diagnosis and treatment principles over centuries to develop a sound foundation for future research. This textbook was originally written as one volume by Samuel L Turek, which was read by me also. Later on, the book was expanded into two-volume multiauthored book, titled “Orthopaedics – Principles and their applications.” This book was last edited in 1981 but continued to be considered as a basic resource material for postgraduate training by the most of the teaching units in the country. The updation of textbook edited by esteemed editor Samuel L Turek is a daunting task. Orthopedics has taken tremendous strides and new modalities of treatment have developed since the last edition (36 years ago). It is creditable to have accepted this responsibility by the present Chief Editor. He has been able to maintain the format and flavor of the original book in this 7th edition. Orthopedic ailments have been described systematically under the subheading of pathogenesis, imaging, diagnosis, and conservative and operative treatment. The imaging has evolved and many new modalities such as magnetic resonance imaging, positron emission tomography scan, and ultrasonography have been used extentively during the last two decades; hence, a new chapter has been added. Distraction osteogenesis as a treatment principle was inducted to orthopedics later, hence was also included as new chapter. Most of the topics have been updated while a few have been rewritten. Volume 1 includes the basic science chapters such as development of the skeleton, histology of cartilage, bone and skeletal muscles, physiology of cartilage, and mineralization of bone. Part 2 of Volume I includes general orthopedic conditions. It details metabolic bone diseases and related dysfunction, bone infections, diseases of joints, and congenital and developmental conditions. The orthopedic neurology has been updated while chapters on bone tumor and skeletal metastasis are rewritten. Volume 2 has 15 chapters. Part 3 covers the regional orthopedic conditions starting from cervical spine, cevicobrachial region, shoulder, elbow, hand, wrist, hip, knee, foot, and back. The chapters on shoulder, elbow, and knee are updated while back, cervical spine, wrist, hand, and hip are vastly modified. Part 4 includes three new introduced topics (a) distraction osteogenesis, (b) skin grafts and flaps in orthopedics, and (c) imaging in orthopedics. Old figures from basic science chapters are retained and new pictures and illustrations are added. It had a section of 63 collar plates with color diagrams. This book has been written with lucid language. Most of the writeups are based on the personal clinical observations on a vast number of patients in various stages of natural history of disease by authors. The Editor-in-Chief has been able to maintain the style with minimal repetition which usually happens with multiauthored books. I am sure the book will fill the void of a textbook for trainees in orthopedics as well as practicing orthopedic surgeons and will prove to be a useful addition in personal and institutional libraries of medical colleges.