Interstitial nephritis caused by HIV infection by itself: a case report 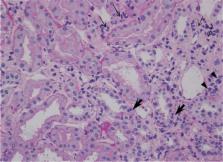 Nef harbors a major determinant of pathogenicity for an AIDS-like disease induced by HIV-1 in transgenic mice.

The spectrum of renal histologies seen in HIV with outcomes, prognostic indicators and clinical correlations.

Brian Rayner,  M Duffield,  Nicola Wearne … (2012)
Two hundred and twenty-one HIV-positive renal biopsies were analysed from Groote Schuur Hospital to determine outcomes and prognostic indicators based on histology and clinical features. The histology findings were compared with patient demographics, clinical and renal parameters, mortality, CD4 count and date of commencing combined anti-retroviral therapy (cART). Follow-up was between 1 and 3.5 years. We found a spectrum of renal histologies in HIV-positive patients of which HIV-associated nephropathy (HIVAN) was the most common histology. cART reduced the mortality in those with any feature of HIVAN by 57% [adjusted hazard ratio (AHR) 0.43, 95% confidence interval (CI) 0.22-0.85]. Of those patients with HIVAN who died, 79% died of renal failure as registered on their death certificate. Proteinuria and microcysts were shown to be poor prognostic indicators (AHR 1.36: 1.09-1.70 and 2.04: 1.24-3.37). In patients with HIVAN alone followed for up to 2 years on cART, estimated glomerular filtration rate remained stable and there was a trend towards decreased proteinuria. cART improved survival in patients with isolated immune complex disease. As mortality is improved in patients with any feature of HIVAN or isolated immune complex disease, cART should be initiated once any of these histological features are established. We believe the spectrum of disease that constitutes HIVAN needs to be more specifically defined. The ultimate outcome may be determined by the histological subtype.

The spectrum of kidney disease in patients with AIDS in the era of antiretroviral therapy.

Christina M. Wyatt,  Susan Morgello,  Rebecca Katz-Malamed … (2009)
With prolonged survival and aging of the HIV-infected population in the era of antiretroviral therapy, biopsy series have found a broad spectrum of HIV-related and co-morbid kidney disease in these patients. Our study describes the variety of renal pathology found in a prospective cohort of antiretroviral-experienced patients (the Manhattan HIV Brain Bank) who had consented to postmortem organ donation. Nearly one-third of 89 kidney tissue donors had chronic kidney disease, and evidence of some renal pathology was found in 75. The most common diagnoses were arterionephrosclerosis, HIV-associated nephropathy and glomerulonephritis. Other diagnoses included pyelonephritis, interstitial nephritis, diabetic nephropathy, fungal infection and amyloidosis. Excluding 2 instances of acute tubular necrosis, slightly over one-third of the cases would have been predicted using current diagnostic criteria for chronic kidney disease. Based on semi-quantitative analysis of stored specimens, pre-mortem microalbuminuria testing could have identified an additional 12 cases. Future studies are needed to evaluate the cost-effectiveness of more sensitive methods for defining chronic kidney disease, in order to identify HIV-infected patients with early kidney disease who may benefit from antiretroviral therapy and other interventions known to delay disease progression and prevent complications.