A Critical Review of Glucose Biosensors Based on Carbon Nanomaterials: Carbon Nanotubes and Graphene 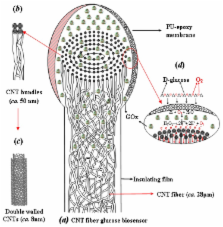 There has been an explosion of research into the physical and chemical properties of carbon-based nanomaterials, since the discovery of carbon nanotubes (CNTs) by Iijima in 1991. Carbon nanomaterials offer unique advantages in several areas, like high surface-volume ratio, high electrical conductivity, chemical stability and strong mechanical strength, and are thus frequently being incorporated into sensing elements. Carbon nanomaterial-based sensors generally have higher sensitivities and a lower detection limit than conventional ones. In this review, a brief history of glucose biosensors is firstly presented. The carbon nanotube and grapheme-based biosensors, are introduced in Sections 3 and 4, respectively, which cover synthesis methods, up-to-date sensing approaches and nonenzymatic hybrid sensors. Finally, we briefly outline the current status and future direction for carbon nanomaterials to be used in the sensing area.

S. Morozov,  K. S. Novoselov,  A. K. Geim … (2007)
We report a naturally-occurring two-dimensional material (graphene that can be viewed as a gigantic flat fullerene molecule, describe its electronic properties and demonstrate all-metallic field-effect transistor, which uniquely exhibits ballistic transport at submicron distances even at room temperature.

Vladimir Bulović,  Hyungbin Son,  Daniel Nezich … (2008)
In this work we present a low cost and scalable technique, via ambient pressure chemical vapor deposition (CVD) on polycrystalline Ni films, to fabricate large area ( approximately cm2) films of single- to few-layer graphene and to transfer the films to nonspecific substrates. These films consist of regions of 1 to approximately 12 graphene layers. Single- or bilayer regions can be up to 20 mum in lateral size. The films are continuous over the entire area and can be patterned lithographically or by prepatterning the underlying Ni film. The transparency, conductivity, and ambipolar transfer characteristics of the films suggest their potential as another materials candidate for electronics and opto-electronic applications.