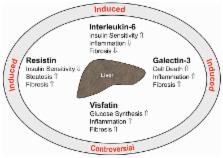 Liver fibrosis can progress to cirrhosis, which is considered a serious disease. The Child-Pugh score and the model of end-stage liver disease score have been established to assess residual liver function in patients with liver cirrhosis. The development of portal hypertension contributes to ascites, variceal bleeding and further complications in these patients. A transjugular intrahepatic portosystemic shunt (TIPS) is used to lower portal pressure, which represents a major improvement in the treatment of patients. Adipokines are proteins released from adipose tissue and modulate hepatic fibrogenesis. These proteins affect various biological processes that are involved in liver function, including angiogenesis, vasodilation, inflammation and deposition of extracellular matrix proteins. The best studied adipokines are adiponectin and leptin. Adiponectin protects against hepatic inflammation and fibrogenesis, and leptin functions as a profibrogenic factor. These and other adipokines are supposed to modulate disease severity in patients with liver cirrhosis. Consequently, circulating levels of these proteins have been analyzed to identify associations with parameters of hepatic function, portal hypertension and its associated complications in patients with liver cirrhosis. This review article briefly addresses the role of adipokines in hepatitis and liver fibrosis. Here, studies having analyzed these proteins in systemic blood in cirrhotic patients are listed to identify adipokines that are comparably changed in the different cohorts of patients with liver cirrhosis. Some studies measured these proteins in systemic, hepatic and portal vein blood or after TIPS to specify the tissues contributing to circulating levels of these proteins and the effect of portal hypertension, respectively.

Natural history and prognostic indicators of survival in cirrhosis: a systematic review of 118 studies.

Transection of the oesophagus for bleeding oesophageal varices

W Ray Kim,  Patrick Kamath (2007)
The Model for End-stage Liver Disease (MELD) was initially created to predict survival in patients with complications of portal hypertension undergoing elective placement of transjugular intrahepatic portosystemic shunts. The MELD which uses only objective variables was validated subsequently as an accurate predictor of survival among different populations of patients with advanced liver disease. The major use of the MELD score has been in allocation of organs for liver transplantation. However, the MELD score has also been shown to predict survival in patients with cirrhosis who have infections, variceal bleeding, as well as in patients with fulminant hepatic failure and alcoholic hepatitis. MELD may be used in selection of patients for surgery other than liver transplantation and in determining optimal treatment for patients with hepatocellular carcinoma who are not candidates for liver transplantation. Despite the many advantages of the MELD score, there are approximately 15%-20% of patients whose survival cannot be accurately predicted by the MELD score. It is possible that the addition of variables that are better determinants of liver and renal function may improve the predictive accuracy of the model. Efforts at further refinement and validation of the MELD score will continue.