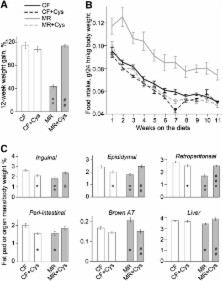 The effects of high protein diets on thermogenesis, satiety and weight loss: a critical review.

Thomas Halton,  Frank Hu (2004)
For years, proponents of some fad diets have claimed that higher amounts of protein facilitate weight loss. Only in recent years have studies begun to examine the effects of high protein diets on energy expenditure, subsequent energy intake and weight loss as compared to lower protein diets. In this study, we conducted a systematic review of randomized investigations on the effects of high protein diets on dietary thermogenesis, satiety, body weight and fat loss. There is convincing evidence that a higher protein intake increases thermogenesis and satiety compared to diets of lower protein content. The weight of evidence also suggests that high protein meals lead to a reduced subsequent energy intake. Some evidence suggests that diets higher in protein result in an increased weight loss and fat loss as compared to diets lower in protein, but findings have not been consistent. In dietary practice, it may be beneficial to partially replace refined carbohydrate with protein sources that are low in saturated fat. Although recent evidence supports potential benefit, rigorous longer-term studies are needed to investigate the effects of high protein diets on weight loss and weight maintenance.

Ignacio Matías,  C DeFelice,  N Orentreich … (1993)
Dietary energy restriction has been a widely used means of experimentally extending mammalian life span. We report here that lifelong reduction in the concentration of a single dietary component, the essential amino acid L-methionine, from 0.86 to 0.17% of the diet results in a 30% longer life span of male Fischer 344 rats. Methionine restriction completely abolished growth, although food intake was actually greater on a body weight basis. Studies of energy consumption in early life indicated that the energy intake of 0.17% methionine-fed animals was near normal for animals of their size, although consumption per animal was below that of the much larger 0.86% methionine-fed rats. Increasing the energy intake of rats fed 0.17% methionine failed to increase their rate of growth, whereas restricting 0.85% methionine-fed rats to the food intake of 0.17% methionine-fed animals did not materially reduce growth, indicating that food restriction was not a factor in life span extension in these experiments. The biochemically well-defined pathways of methionine metabolism and utilization offer the potential for uncovering the precise mechanism(s) underlying this specific dietary restriction-related extension of life span.