Taxonaut: an application software for comparative display of multiple taxonomies with a use case of GBIF Species API 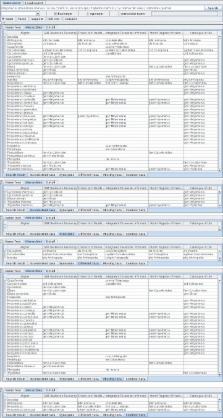 A Java application was developed to compare multiple taxonomies graphically using classification data acquired from GBIF’s ChecklistBank via the GBIF Species API. It uses a table to display taxonomies where each column represents a taxonomy under comparison, with an aligner column to organise taxa by name. Each cell contains the name of a taxon if the classification in that column contains the name. Each column also has a cell showing the hierarchy of the taxonomy by a folder metaphor where taxa are aligned and synchronised in the aligner column. A set of those comparative tables shows taxa categorised by relationship between taxonomies. The result set is also available as tables in an Excel format file.

The Concept of "Potential Taxa" in Databases

RICHARD PYLE,  ELLINOR MICHEL (2008)
Nomenclature represents the backbone upon which virtually all biological information is organized. However, the practice of zoological nomenclature has changed relatively little since its start in 1758. As modern technology changes the paradigm under which modern scientists exchange information, there is increasing need to capitalize on these same technologies to fortify nomenclature. ZooBank has been proposed as the official registry of names and nomenclatural acts, in zoology, as well as associated published works and their authors, and type specimens. Having a coordinated registry of zoological names, integrated with the existing Code of Zoological Nomenclature, will allow increased efficiency of communication among biologists, and enhanced stability of names. Such a registry would encompass two distinct realms, each with their own set of challenges. Retrospective registration involves the monumental task of aggregating and validating two and a half centuries of existing names, whereas prospective registration must be tightly integrated with the future paradigm in which scientific names are created and managed under new models of publication. The prototype of ZooBank has been hosted at Bishop Museum during its initial development phase. Following the lead of standard-setting bodies in biodiversity informatics, Life Science Identifiers (LSIDs) have been selected for use as the globally unique identifiers for ZooBank registration entries. The first ZooBank LSIDs were issued on January 1 st , 2008, and included five new fish species described in a work published that same day, as well as all 4,819 names established in the 10 th Edition of Linnaeus’ Systema Naturae. Three alternate scenarios for implementing mandatory registration in ZooBank have been articulated, each incorporating different degrees of coordination between published works and registration events. A robust discussion involving a broad spectrum of practicing zoological taxonomists is required over the next several years to define the specific implementation aspects of ZooBank.