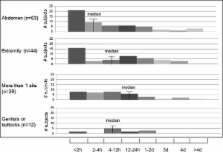 Hereditary angioedema (HAE) due to C1 inhibitor deficiency is a rare but serious and potentially life-threatening disease marked by spontaneous, recurrent attacks of swelling. The study objective was to characterize direct and indirect resource utilization associated with HAE from the patient perspective in Europe.

The study was conducted in Spain, Germany, and Denmark to assess the real-world experience of HAE via a cross-sectional survey of HAE patients, including direct and indirect resource utilization during and between attacks for patients and their caregivers over the past 6 months. A regression model examined predictors of medical resource utilization.

Overall, 164 patients had an attack in the past 6 months and were included in the analysis. The most significant predictor of medical resource utilization was the severity of the last attack (OR 2.6; p < 0.001). Among patients who sought medical care during the last attack (23%), more than half utilized the emergency department. The last attack prevented patients from their normal activities an average of 4–12 hours. Patient and caregiver absenteeism increased with attack severity and frequency. Among patients who were working or in school (n = 120), 72 provided work/school absenteeism data, resulting in an estimated 20 days missing from work/school on average per year; 51% (n = 84) indicated that HAE has hindered their career/educational advancement.

HAE poses a considerable burden on patients and their families in terms of direct medical costs and indirect costs related to lost productivity. This burden is substantial at the time of attacks and in between attacks.

Jochen Hardt,  G. Meng,  Petra Staubach … (2006)
Hereditary angioedema (HAE) due to C1 inhibitor deficiency is clinically characterized by relapsing skin swellings, abdominal pain attacks, and life-threatening upper airway obstruction. Our aim was to examine a temporal and spatial pattern of the edema episodes by evaluating the long-term course of hereditary angioedema in order to establish a specific swelling pattern. Data were generated from 221 patients with C1 inhibitor deficiency by asking them about symptoms they experienced during their edema episodes. Documentation was accomplished through the use of standardized questionnaires. A total of 131110 edema episodes were observed. Clinical symptoms started at a mean age of 11.2 (SD 7.7) years. During the following cumulative 5736 years, only 370 (6.5%) symptom-free years occurred. Skin swellings, including extremity, facial, genital, and trunk swellings, and abdominal attacks occurred in 97.4% of all edema episodes of the disease. The other episodes were laryngeal edema (0.9%); edema of the soft palate (0.6%); tongue swellings (0.3%); headache episodes (0.7%); episodes affecting urinary bladder (0.3%), chest (0.2%), muscles (0.4%), joints (0.1%), kidneys (0.1%), and esophagus (0.05%), and were partly combined with other edema episodes. The per-patient analysis and the per-episode analysis revealed markedly discrepant results. On average, women had a more severe course of the disease than men. Patients with early onset of clinical symptoms were affected more severely than those with late onset. The described swelling pattern is specific for HAE and allows a tentative diagnosis based on clinical symptoms and the course of the disease.

2010 International consensus algorithm for the diagnosis, therapy and management of hereditary angioedema