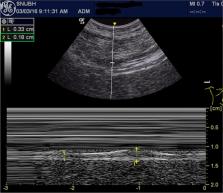 Impairment of diaphragmatic function is one of the main pathophysiological mechanisms of chronic obstructive pulmonary disease (COPD) and is known to be related to acute exacerbation. Ultrasonography (US) allows for a simple, non-invasive assessment of diaphragm kinetics. The purpose of this study was to investigate the changes in diaphragmatic function during acute exacerbation of COPD, by US.

Ten patients were enrolled. All patients were male, and the mean age was 79.8 years. The TF of the right diaphragm showed a significant increase from the initial to the follow-up values (80.1 ± 104.9 mm vs. 159.5 ± 224.6 mm, p = 0.011); however, the diaphragmatic excursion did not vary significantly between the initial and follow-up values (22 ± 6 mm vs 23 ±12 mm). The change in excursion between the stable and exacerbation periods was positively correlated with time to the next exacerbation and negatively correlated with the time taken to recover from the exacerbation.

These data support the possibility that a defect in diaphragm thickening is related to acute exacerbation of COPD.

Ewan C Goligher,  Eddy Fan,  Margaret Herridge … (2015)
Diaphragm atrophy and dysfunction have been reported in humans during mechanical ventilation, but the prevalence, causes, and functional impact of changes in diaphragm thickness during routine mechanical ventilation for critically ill patients are unknown.