Phylogenetic classifications are informative, stable, and pragmatic: the case for monophyletic taxa 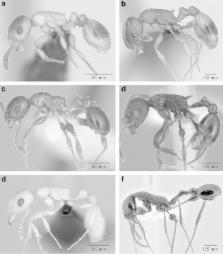 The evolution of myrmicine ants: phylogeny and biogeography of a hyperdiverse ant clade (Hymenoptera: Formicidae)

Death of an order: a comprehensive molecular phylogenetic study confirms that termites are eusocial cockroaches.

Daegan J.G. Inward, George Beccaloni, Paul Eggleton (2007)
Termites are instantly recognizable mound-builders and house-eaters: their complex social lifestyles have made them incredibly successful throughout the tropics. Although known as 'white ants', they are not ants and their relationships with other insects remain unclear. Our molecular phylogenetic analyses, the most comprehensive yet attempted, show that termites are social cockroaches, no longer meriting being classified as a separate order (Isoptera) from the cockroaches (Blattodea). Instead, we propose that they should be treated as a family (Termitidae) of cockroaches. It is surprising to find that a group of wood-feeding cockroaches has evolved full sociality, as other ecologically dominant fully social insects (e.g. ants, social bees and social wasps) have evolved from solitary predatory wasps.

Bonnie B. Blaimer, Seán Brady, Ted R Schultz … (2015)
Background Ultraconserved elements (UCEs) have been successfully used in phylogenomics for a variety of taxa, but their power in phylogenetic inference has yet to be extensively compared with that of traditional Sanger sequencing data sets. Moreover, UCE data on invertebrates, including insects, are sparse. We compared the phylogenetic informativeness of 959 UCE loci with a multi-locus data set of ten nuclear markers obtained via Sanger sequencing, testing the ability of these two types of data to resolve and date the evolutionary history of the second most species-rich subfamily of ants in the world, the Formicinae. Results Phylogenetic analyses show that UCEs are superior in resolving ancient and shallow relationships in formicine ants, demonstrated by increased node support and a more resolved phylogeny. Phylogenetic informativeness metrics indicate a twofold improvement relative to the 10-gene data matrix generated from the identical set of taxa. We were able to significantly improve formicine classification based on our comprehensive UCE phylogeny. Our divergence age estimations, using both UCE and Sanger data, indicate that crown-group Formicinae are older (104–117 Ma) than previously suggested. Biogeographic analyses infer that the diversification of the subfamily has occurred on all continents with no particular hub of cladogenesis. Conclusions We found UCEs to be far superior to the multi-locus data set in estimating formicine relationships. The early history of the clade remains uncertain due to ancient rapid divergence events that are unresolvable even with our genomic-scale data, although this might be largely an effect of several problematic taxa subtended by long branches. Our comparison of divergence ages from both Sanger and UCE data demonstrates the effectiveness of UCEs for dating analyses. This comparative study highlights both the promise and limitations of UCEs for insect phylogenomics, and will prove useful to the growing number of evolutionary biologists considering the transition from Sanger to next-generation sequencing approaches. Electronic supplementary material The online version of this article (doi:10.1186/s12862-015-0552-5) contains supplementary material, which is available to authorized users.