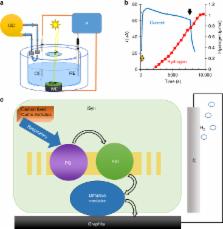 Oxygenic photosynthetic organisms perform solar energy conversion of water and CO 2 to O 2 and sugar at a broad range of wavelengths and light intensities. These cells also metabolize sugars using a respiratory system that functionally overlaps the photosynthetic apparatus. In this study, we describe the harvesting of photocurrent used for hydrogen production from live cyanobacteria. A non-harmful gentle physical treatment of the cyanobacterial cells enables light-driven electron transfer by an endogenous mediator to a graphite electrode in a bio-photoelectrochemical cell, without the addition of sacrificial electron donors or acceptors. We show that the photocurrent is derived from photosystem I and that the electrons originate from carbohydrates digested by the respiratory system. Finally, the current is utilized for hydrogen evolution on the cathode at a bias of 0.65 V. Taken together, we present a bio-photoelectrochemical system where live cyanobacteria produce stable photocurrent that can generate hydrogen.

Biologically ### produced electrical currents and hydrogen are new energy sources. Here, the authors find that low presser microfluidizer treatment produced cyanobacterium that can utilize electrons from respiratory and photosynthesis to promote current and hydrogen generation, without the addition of exogenous electron mediators.

Indraneel D Shikhare,  Daniel Bond,  Dan Coursolle … (2008)
Bacteria able to transfer electrons to metals are key agents in biogeochemical metal cycling, subsurface bioremediation, and corrosion processes. More recently, these bacteria have gained attention as the transfer of electrons from the cell surface to conductive materials can be used in multiple applications. In this work, we adapted electrochemical techniques to probe intact biofilms of Shewanella oneidensis MR-1 and Shewanella sp. MR-4 grown by using a poised electrode as an electron acceptor. This approach detected redox-active molecules within biofilms, which were involved in electron transfer to the electrode. A combination of methods identified a mixture of riboflavin and riboflavin-5'-phosphate in supernatants from biofilm reactors, with riboflavin representing the dominant component during sustained incubations (>72 h). Removal of riboflavin from biofilms reduced the rate of electron transfer to electrodes by >70%, consistent with a role as a soluble redox shuttle carrying electrons from the cell surface to external acceptors. Differential pulse voltammetry and cyclic voltammetry revealed a layer of flavins adsorbed to electrodes, even after soluble components were removed, especially in older biofilms. Riboflavin adsorbed quickly to other surfaces of geochemical interest, such as Fe(III) and Mn(IV) oxy(hydr)oxides. This in situ demonstration of flavin production, and sequestration at surfaces, requires the paradigm of soluble redox shuttles in geochemistry to be adjusted to include binding and modification of surfaces. Moreover, the known ability of isoalloxazine rings to act as metal chelators, along with their electron shuttling capacity, suggests that extracellular respiration of minerals by Shewanella is more complex than originally conceived.