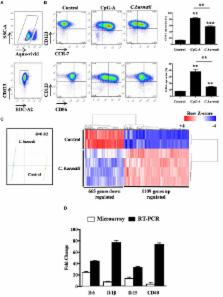 Plasmacytoid dendritic cells (pDCs) play a major role in antiviral immunity via the production of type I interferons (IFNs). There is some evidence that pDCs interact with bacteria but it is not yet clear whether they are protective or contribute to bacterial pathogenicity. We wished to investigate whether Coxiella burnetii, the agent of Q fever, interacts with pDCs. The stimulation of pDCs with C. burnetii increased the expression of activation and migratory markers (CD86 and CCR7) as determined by flow cytometry and modulated gene expression program as revealed by a microarray approach. Indeed, genes encoding for pro-inflammatory cytokines, chemokines, and type I INF were up-regulated. The up-regulation of type I IFN was correlated with an increase in IFN-α release by C. burnetii-stimulated pDCs. We also investigated pDCs in patients with Q fever endocarditis. Using flow cytometry and a specific gating strategy, we found that the number of circulating pDCs was significantly lower in patients with Q fever endocarditis as compared to healthy donors. In addition, the remaining circulating pDCs expressed activation and migratory markers. As a whole, our study identified non-previously reported activation of pDCs by C. burnetii and their modulation during Q fever.

The role of pattern-recognition receptors in innate immunity: update on Toll-like receptors.

Taro Kawai,  Shizuo Akira (2010)
The discovery of Toll-like receptors (TLRs) as components that recognize conserved structures in pathogens has greatly advanced understanding of how the body senses pathogen invasion, triggers innate immune responses and primes antigen-specific adaptive immunity. Although TLRs are critical for host defense, it has become apparent that loss of negative regulation of TLR signaling, as well as recognition of self molecules by TLRs, are strongly associated with the pathogenesis of inflammatory and autoimmune diseases. Furthermore, it is now clear that the interaction between TLRs and recently identified cytosolic innate immune sensors is crucial for mounting effective immune responses. Here we describe the recent advances that have been made by research into the role of TLR biology in host defense and disease.

The nature of the principal type 1 interferon-producing cells in human blood.

Eric S. Ho,  M Shodell,  Gene P. Siegal … (1999)
Interferons (IFNs) are the most important cytokines in antiviral immune responses. "Natural IFN-producing cells" (IPCs) in human blood express CD4 and major histocompatibility complex class II proteins, but have not been isolated and further characterized because of their rarity, rapid apoptosis, and lack of lineage markers. Purified IPCs are here shown to be the CD4(+)CD11c- type 2 dendritic cell precursors (pDC2s), which produce 200 to 1000 times more IFN than other blood cells after microbial challenge. pDC2s are thus an effector cell type of the immune system, critical for antiviral and antitumor immune responses.