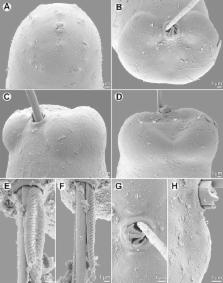 Based on light and scanning electron microscopical studies of nematode specimens (males and mature females) collected from the ovary of groupers (Serranidae, Perciformes) in the Mediterranean Sea off Tunisia (near Tunis and Sfax), two gonad-infecting species of Philometra Costa, 1845 (Nematoda, Philometridae) are reported: Philometra inexpectata n. sp. from the mottled grouper Mycteroperca rubra and P. jordanoi (López-Neyra, 1951) from the dusky grouper Epinephelus marginatus. Identification of both fish species was confirmed by molecular barcoding. The new species is mainly characterized by the length of equally long spicules (147–165 μm), the gubernaculum (63–93 μm long) bearing at the tip two dorsolateral lamellar parts separated from each other by a smooth median field, a V-shaped mound on the male caudal extremity, the presence of a pair of large caudal papillae located posterior to the cloaca and by the body length of the males (1.97–2.43 mm). Philometra inexpectata n. sp. is the fifth known gonad-infecting philometrid species parasitizing serranid fishes in the Mediterranean region. The males of P. jordanoi were examined by scanning electron microscopy for the first time; this detailed study revealed some new taxonomically important morphological features, such as the number and arrangement of cephalic and caudal papillae, presence of amphids and phasmids and mainly the lamellate structures at the posterior end of the gubernaculum. A key to gonad-infecting species of Philometra parasitic in serranid fishes is provided.

Marc Kochzius,  Christian Seidel,  Aglaia Antoniou … (2010)
Background International fish trade reached an import value of 62.8 billion Euro in 2006, of which 44.6% are covered by the European Union. Species identification is a key problem throughout the life cycle of fishes: from eggs and larvae to adults in fisheries research and control, as well as processed fish products in consumer protection. Methodology/Principal Findings This study aims to evaluate the applicability of the three mitochondrial genes 16S rRNA (16S), cytochrome b (cyt b), and cytochrome oxidase subunit I (COI) for the identification of 50 European marine fish species by combining techniques of “DNA barcoding” and microarrays. In a DNA barcoding approach, neighbour Joining (NJ) phylogenetic trees of 369 16S, 212 cyt b, and 447 COI sequences indicated that cyt b and COI are suitable for unambiguous identification, whereas 16S failed to discriminate closely related flatfish and gurnard species. In course of probe design for DNA microarray development, each of the markers yielded a high number of potentially species-specific probes in silico, although many of them were rejected based on microarray hybridisation experiments. None of the markers provided probes to discriminate the sibling flatfish and gurnard species. However, since 16S-probes were less negatively influenced by the “position of label” effect and showed the lowest rejection rate and the highest mean signal intensity, 16S is more suitable for DNA microarray probe design than cty b and COI. The large portion of rejected COI-probes after hybridisation experiments (>90%) renders the DNA barcoding marker as rather unsuitable for this high-throughput technology. Conclusions/Significance Based on these data, a DNA microarray containing 64 functional oligonucleotide probes for the identification of 30 out of the 50 fish species investigated was developed. It represents the next step towards an automated and easy-to-handle method to identify fish, ichthyoplankton, and fish products.

Amira Chaabane,  Lassad Neifar,  Jean-Lou Justine (2015)
Pseudorhabdosynochus regius n. sp. is described from the gills of the mottled grouper Mycteroperca rubra caught off Senegal, Tunisia and Libya (type-locality: off Dakar, Senegal). The species is distinguished from its congeners by the structure of its sclerotised vagina (length 26–35 μm), which exhibits a trumpet in continuity with the primary canal, a straight primary canal, and primary and secondary chambers included in a common sclerotised mass along the primary canal. The species is also characterised by small squamodiscs (length 20–40 μm) with 10–11 rows of rodlets. Its closest relatives (based on the structure of the sclerotised vagina) are species mostly found in the Mediterranean Sea and parasites on species of Mycteroperca. A second species of Pseudorhabdosynochus Yamaguti, 1958 is reported from the same host and localities but not described. A list of diplectanids from groupers in the Mediterranean Sea is provided. We point out that a recent article was not compliant with the new Article 8.5.3 of the International Code of Zoological Nomenclature; for this reason, three species, P. nhatrangensis Dang, Bristow, Schander & Berland, 2013, P. vietnamensis Dang et al., 2013 and P. brunei Dang et al., 2013, are invalid.

Charlotte Schoelinck,  Damien Hinsinger,  Agnes Dettai … (2014)
Background Ciguatera fish poisoning (CFP) is a significant public health problem due to dinoflagellates. It is responsible for one of the highest reported incidence of seafood-borne illness and Groupers are commonly reported as a source of CFP due to their position in the food chain. With the role of recent climate change on harmful algal blooms, CFP cases might become more frequent and more geographically widespread. Since there is no appropriate treatment for CFP, the most efficient solution is to regulate fish consumption. Such a strategy can only work if the fish sold are correctly identified, and it has been repeatedly shown that misidentifications and species substitutions occur in fish markets. Methods We provide here both a DNA-barcoding reference for groupers, and a new phylogenetic reconstruction based on five genes and a comprehensive taxonomical sampling. We analyse the correlation between geographic range of species and their susceptibility to ciguatera accumulation, and the co-occurrence of ciguatoxins in closely related species, using both character mapping and statistical methods. Results Misidentifications were encountered in public databases, precluding accurate species identifications. Epinephelinae now includes only twelve genera (vs. 15 previously). Comparisons with the ciguatera incidences show that in some genera most species are ciguateric, but statistical tests display only a moderate correlation with the phylogeny. Atlantic species were rarely contaminated, with ciguatera occurrences being restricted to the South Pacific. Conclusions The recent changes in classification based on the reanalyses of the relationships within Epinephelidae have an impact on the interpretation of the ciguatera distribution in the genera. In this context and to improve the monitoring of fish trade and safety, we need to obtain extensive data on contamination at the species level. Accurate species identifications through DNA barcoding are thus an essential tool in controlling CFP since meal remnants in CFP cases can be easily identified with molecular tools.