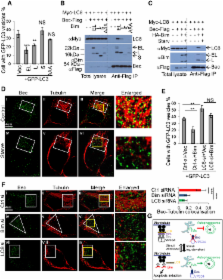 Bim is a proapoptotic BH3-only Bcl-2 family member. In response to death stimuli, Bim dissociates from the dynein light chain 1 (DYNLL1/LC8), where it is inactive, and can then initiate Bax/Bak-mediated mitochondria-dependent apoptosis. We found that Bim depletion increases autophagosome synthesis in cells and in vivo, and this effect is inhibited by overexpression of cell death-deficient Bim. Bim inhibits autophagy by interacting with Beclin 1, an autophagy regulator, and this interaction is facilitated by LC8. Bim bridges the Beclin 1-LC8 interaction and thereby inhibits autophagy by mislocalizing Beclin 1 to the dynein motor complex. Starvation, an autophagic stimulus, induces Bim phosphorylation, which abrogates LC8 binding to Bim, leading to dissociation of Bim and Beclin 1. Our data suggest that Bim switches locations between apoptosis-inactive/autophagy-inhibitory and apoptosis-active/autophagy-permissive sites.

Elizabeth L. Axe,  Simon A. Walker,  Maria Manifava … (2008)
Autophagy is the engulfment of cytosol and organelles by double-membrane vesicles termed autophagosomes. Autophagosome formation is known to require phosphatidylinositol 3-phosphate (PI(3)P) and occurs near the endoplasmic reticulum (ER), but the exact mechanisms are unknown. We show that double FYVE domain–containing protein 1, a PI(3)P-binding protein with unusual localization on ER and Golgi membranes, translocates in response to amino acid starvation to a punctate compartment partially colocalized with autophagosomal proteins. Translocation is dependent on Vps34 and beclin function. Other PI(3)P-binding probes targeted to the ER show the same starvation-induced translocation that is dependent on PI(3)P formation and recognition. Live imaging experiments show that this punctate compartment forms near Vps34-containing vesicles, is in dynamic equilibrium with the ER, and provides a membrane platform for accumulation of autophagosomal proteins, expansion of autophagosomal membranes, and emergence of fully formed autophagosomes. This PI(3)P-enriched compartment may be involved in autophagosome biogenesis. Its dynamic relationship with the ER is consistent with the idea that the ER may provide important components for autophagosome formation.

Lin Chen,  Daniel Willis,  Jamie I. Fletcher … (2005)
Apoptosis is initiated when Bcl-2 and its prosurvival relatives are engaged by proapoptotic BH3-only proteins via interaction of its BH3 domain with a groove on the Bcl-2-like proteins. These interactions have been considered promiscuous, but our analysis of the affinity of eight BH3 peptides for five Bcl-2-like proteins has revealed that the interactions vary over 10,000-fold in affinity, and accordingly, only certain protein pairs associate inside cells. Bim and Puma potently engaged all the prosurvival proteins comparably. Bad, however, bound tightly to Bcl-2, Bcl-xL, and Bcl-w but only weakly to A1 and not to Mcl-1. Strikingly, Noxa bound only Mcl-1 and A1. In accord with their complementary binding, Bad and Noxa cooperated to induce potent killing. The results suggest that apoptosis relies on selective interactions between particular subsets of these proteins and that it should be feasible to discover BH3-mimetic drugs that inactivate specific prosurvival targets.

Mitochondrial autophagy is an HIF-1-dependent adaptive metabolic response to hypoxia.

Eun J. Baek,  Huafeng Zhang,  Larissa Shimoda … (2008)
Autophagy is a process by which cytoplasmic organelles can be catabolized either to remove defective structures or as a means of providing macromolecules for energy generation under conditions of nutrient starvation. In this study we demonstrate that mitochondrial autophagy is induced by hypoxia, that this process requires the hypoxia-dependent factor-1-dependent expression of BNIP3 and the constitutive expression of Beclin-1 and Atg5, and that in cells subjected to prolonged hypoxia, mitochondrial autophagy is an adaptive metabolic response which is necessary to prevent increased levels of reactive oxygen species and cell death.