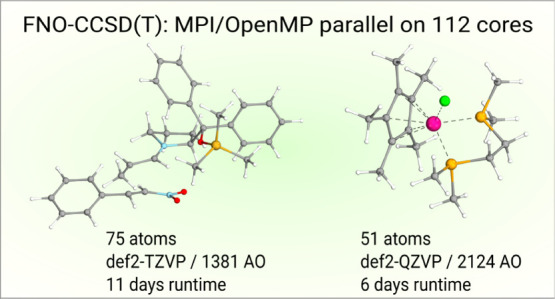 The accurate and systematically improvable frozen natural orbital (FNO) and natural auxiliary function (NAF) cost-reducing approaches are combined with our recent coupled-cluster singles, doubles, and perturbative triples [CCSD(T)] implementations. Both of the closed- and open-shell FNO-CCSD(T) codes benefit from OpenMP parallelism, completely or partially integral-direct density-fitting algorithms, checkpointing, and hand-optimized, memory- and operation count effective implementations exploiting all permutational symmetries. The closed-shell CCSD(T) code requires negligible disk I/O and network bandwidth, is MPI/OpenMP parallel, and exhibits outstanding peak performance utilization of 50–70% up to hundreds of cores. Conservative FNO and NAF truncation thresholds benchmarked for challenging reaction, atomization, and ionization energies of both closed- and open-shell species are shown to maintain 1 kJ/mol accuracy against canonical CCSD(T) for systems of 31–43 atoms even with large basis sets. The cost reduction of up to an order of magnitude achieved extends the reach of FNO-CCSD(T) to systems of 50–75 atoms (up to 2124 atomic orbitals) with triple- and quadruple-ζ basis sets, which is unprecedented without local approximations. Consequently, a considerably larger portion of the chemical compound space can now be covered by the practically “gold standard” quality FNO-CCSD(T) method using affordable resources and about a week of wall time. Large-scale applications are presented for organocatalytic and transition-metal reactions as well as noncovalent interactions. Possible applications for benchmarking local CCSD(T) methods, as well as for the accuracy assessment or parametrization of less complete models, for example, density functional approximations or machine learning potentials, are also outlined.

Florian Weigend, Reinhart Ahlrichs (2005)
Gaussian basis sets of quadruple zeta valence quality for Rb-Rn are presented, as well as bases of split valence and triple zeta valence quality for H-Rn. The latter were obtained by (partly) modifying bases developed previously. A large set of more than 300 molecules representing (nearly) all elements-except lanthanides-in their common oxidation states was used to assess the quality of the bases all across the periodic table. Quantities investigated were atomization energies, dipole moments and structure parameters for Hartree-Fock, density functional theory and correlated methods, for which we had chosen Møller-Plesset perturbation theory as an example. Finally recommendations are given which type of basis set is used best for a certain level of theory and a desired quality of results.

Quantum Theory of Many-Particle Systems. I. Physical Interpretations by Means of Density Matrices, Natural Spin-Orbitals, and Convergence Problems in the Method of Configurational Interaction