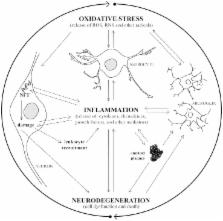 Alzheimer’s disease (AD), the most common neurodegenerative disorder associated with dementia, is typified by the pathological accumulation of amyloid Aβ peptides and neurofibrillary tangles (NFT) within the brain. Considerable evidence indicates that many events contribute to AD progression, including oxidative stress, inflammation, and altered cholesterol metabolism. The brain’s high lipid content makes it particularly vulnerable to oxidative species, with the consequent enhancement of lipid peroxidation and cholesterol oxidation, and the subsequent formation of end products, mainly 4-hydroxynonenal and oxysterols, respectively from the two processes. The chronic inflammatory events observed in the AD brain include activation of microglia and astrocytes, together with enhancement of inflammatory molecule and free radical release. Along with glial cells, neurons themselves have been found to contribute to neuroinflammation in the AD brain, by serving as sources of inflammatory mediators. Oxidative stress is intimately associated with neuroinflammation, and a vicious circle has been found to connect oxidative stress and inflammation in AD. Alongside oxidative stress and inflammation, altered cholesterol metabolism and hypercholesterolemia also significantly contribute to neuronal damage and to progression of AD. Increasing evidence is now consolidating the hypothesis that oxidized cholesterol is the driving force behind the development of AD, and that oxysterols are the link connecting the disease to altered cholesterol metabolism in the brain and hypercholesterolemia; this is because of the ability of oxysterols, unlike cholesterol, to cross the blood brain barrier (BBB). The key role of oxysterols in AD pathogenesis has been strongly supported by research pointing to their involvement in modulating neuroinflammation, Aβ accumulation, and cell death. This review highlights the key role played by cholesterol and oxysterols in the brain in AD pathogenesis.

The role of apolipoprotein E in Alzheimer's disease.

Jungsu Kim,  Jacob Basak,  David Holtzman (2009)
The epsilon4 allele of apolipoprotein E (APOE) is the major genetic risk factor for Alzheimer's disease (AD). Although there have been numerous studies attempting to elucidate the underlying mechanism for this increased risk, how apoE4 influences AD onset and progression has yet to be proven. However, prevailing evidence suggests that the differential effects of apoE isoforms on Abeta aggregation and clearance play the major role in AD pathogenesis. Other potential mechanisms, such as the differential modulation of neurotoxicity and tau phosphorylation by apoE isoforms as well as its role in synaptic plasticity and neuroinflammation, have not been ruled out. Inconsistent results among studies have made it difficult to define whether the APOE epsilon4 allele represents a gain of toxic function, a loss of neuroprotective function, or both. Therapeutic strategies based on apoE propose to reduce the toxic effects of apoE4 or to restore the physiological, protective functions of apoE.

Andy Y. Shih,  Delinda Johnson,  Gloria Wong … (2003)
Astrocytes have a higher antioxidant potential in comparison to neurons. Pathways associated with this selective advantage include the transcriptional regulation of antioxidant enzymes via the action of the Cap'n'Collar transcription factor Nrf2 at the antioxidant response element (ARE). Here we show that Nrf2 overexpression can reengineer neurons to express this glial pathway and enhance antioxidant gene expression. However, Nrf2-mediated protection from oxidative stress is conferred primarily by glia in mixed cultures. The antioxidant properties of Nrf2-overexpressing glia are more pronounced than those of neurons, and a relatively small number of these glia (< 1% of total cell number added) could protect fully cocultured naive neurons from oxidative glutamate toxicity associated with glutathione (GSH) depletion. Microarray and biochemical analyses indicate a coordinated upregulation of enzymes involved in GSH biosynthesis (xCT cystine antiporter, gamma-glutamylcysteine synthetase, and GSH synthase), use (glutathione S-transferase and glutathione reductase), and export (multidrug resistance protein 1) with Nrf2 overexpression, leading to an increase in both media and intracellular GSH. Selective inhibition of glial GSH synthesis and the supplementation of media GSH indicated that an Nrf2-dependent increase in glial GSH synthesis was both necessary and sufficient for the protection of neurons, respectively. Neuroprotection was not limited to overexpression of Nrf2, because activation of endogenous glial Nrf2 by the small molecule ARE inducer, tert-butylhydroquinone, also protected against oxidative glutamate toxicity.