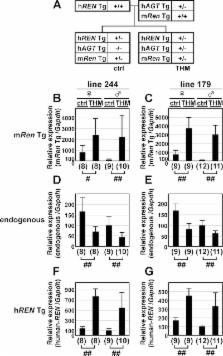 Renin, a rate-limiting enzyme in the renin–angiotensin system, is regulated to maintain blood pressure homeostasis: renin gene expression in the kidney is suppressed in a hypertensive environment. We found that expression of a 15-kb human RENIN (h REN) transgene was aberrantly upregulated (>4.2-fold), while the endogenous mouse renin (m Ren) gene was suppressed (>1.7-fold) in Tsukuba hypertensive mice (THM), a model for genetically induced hypertension. We then generated transgenic mice using a 13-kb m Ren gene fragment that was homologous to the 15-kb h REN transgene and found that its expression was also upregulated (>3.1-fold) in THM, suggesting that putative silencing elements of the renin genes were distally located in the loci. We next examined the possible role of a previously identified mouse distal enhancer (mdE) located outside of the 13-kb m Ren gene fragment. Deletion of the mdE in the context of a 156-kb m Ren transgene did not affect its transcriptional repression in THM, implying that although the silencing element of the m Ren gene is located within the 156-kb fragment tested, it is distinct from the mdE. Consistent with these results, deletion of the 63-kb region upstream of the mdE from the endogenous m Ren gene locus abrogated its transcriptional repression in THM. We finally tested whether dysregulation of the short renin transgenes also occurred in the fetal or neonatal kidneys of THM and found that their expression was not aberrantly upregulated, demonstrating that aberrant regulation of short renin transgenes commences sometime between neonate and adult periods.

Donald L. Court,  Deborah Swing,  J. de Visscher … (2001)
Recently, a highly efficient recombination system for chromosome engineering in Escherichia coli was described that uses a defective lambda prophage to supply functions that protect and recombine a linear DNA targeting cassette with its substrate sequence (Yu et al., 2000, Proc. Natl. Acad. Sci. USA 97, 5978-5983). Importantly, the recombination is proficient with DNA homologies as short as 30-50 bp, making it possible to use PCR-amplified fragments as the targeting cassette. Here, we adapt this prophage system for use in bacterial artificial chromosome (BAC) engineering by transferring it to DH10B cells, a BAC host strain. In addition, arabinose inducible cre and flpe genes are introduced into these cells to facilitate BAC modification using loxP and FRT sites. Next, we demonstrate the utility of this recombination system by using it to target cre to the 3' end of the mouse neuron-specific enolase (Eno2) gene carried on a 250-kb BAC, which made it possible to generate BAC transgenic mice that specifically express Cre in all mature neurons. In addition, we show that fragments as large as 80 kb can be subcloned from BACs by gap repair using this recombination system, obviating the need for restriction enzymes or DNA ligases. Finally, we show that BACs can be modified with this recombination system in the absence of drug selection. The ability to modify or subclone large fragments of genomic DNA with precision should facilitate many kinds of genomic experiments that were difficult or impossible to perform previously and aid in studies of gene function in the postgenomic era. Copyright 2001 Academic Press.

Cyclooxygenase-2 is associated with the macula densa of rat kidney and increases with salt restriction.

Richard M. Breyer,  J McKanna,  R. Harris … (1994)
The kidney is a rich source of prostaglandins. These eicosanoids, formed by cyclooxygenase-dependent metabolism of arachidonic acid, are important physiologic mediators of renal glomerular hemodynamics and tubular sodium and water reabsorption. Two separate isoforms of cyclooxygenase (COX) have now been identified: constitutive COX-1, encoded by a 2.8-kb mRNA, and mitogen-activated COX-2, encoded by a 4.0-4.5-kb mRNA. COX-2 expression increases during development and inflammation, but, except for brain, constitutive expression is low. It has been generally accepted that physiologic renal production of prostaglandins is mediated by COX-1. However, in the absence of inflammation, low levels of COX-2 mRNA are also detectable in the kidney. To examine the role of COX-2 in the kidney and determine its intrarenal localization, we used a 1.3-kb cDNA probe specific for the 3' untranslated region of rat COX-2 and COX-2-specific antiserum. The COX-2-specific cDNA probe hybridized with a 4.4-kb transcript in total RNA from adult rat kidney. Immunoblots of microsomes isolated from kidney cortex and papilla indicated immunoreactive COX-2 in both locations. In situ hybridization and immunohistochemistry indicated that renal cortical COX-2 expression was localized to the macula densa of the juxtaglomerular apparatus and to adjacent epithelial cells of the cortical thick ascending limb of Henle. In addition, COX-2 immunoreactivity was detected in interstitial cells in the papilla. No COX-2 message or immunoreactive protein was detected in arterioles, glomeruli, or cortical or medullary collecting ducts. When animals were chronically sodium restricted, the level of COX-2 in the region of the macula densa increased threefold (from 0.86 +/- 0.08 to 2.52 +/- 0.43/mm2) and the total area of the COX-2 immunoreactive cells in cortex increased from 34 microns2/mm2 of cortex to 226 microns2/mm2 of cortex. The intrarenal distribution of COX-2 and its increased expression in response to sodium restriction suggest that in addition to its proposed role in inflammatory and growth responses, this enzyme may play an important role in the regulation of salt, volume, and blood pressure homeostasis.

Genome organization and long-range regulation of gene expression by enhancers.

Bing Ren,  Bryan Smallwood (2013)
It is now well accepted that cell-type specific gene regulation is under the purview of enhancers. Great strides have been made recently to characterize and identify enhancers both genetically and epigenetically for multiple cell types and species, but efforts have just begun to link enhancers to their target promoters. Mapping these interactions and understanding how the 3D landscape of the genome constrains such interactions is fundamental to our understanding of mammalian gene regulation. Here, we review recent progress in mapping long-range regulatory interactions in mammalian genomes, focusing on transcriptional enhancers and chromatin organization principles. Copyright © 2013. Published by Elsevier Ltd.