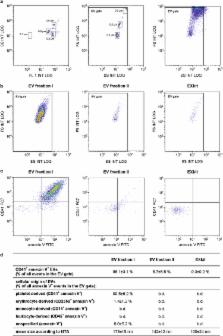 Cells release diverse types of vesicles constitutively or in response to proliferation, injury, inflammation, or stress. Extracellular vesicles (EVs) are crucial in intercellular communication, and there is emerging evidence for their roles in inflammation, cancer, and thrombosis. We investigated the thrombogenicity of platelet-derived EVs, which constitute the majority of circulating EVs in human blood, and assessed the contributions of phosphatidylserine and tissue factor exposure on thrombin generation. Addition of platelet EVs to vesicle-free human plasma induced thrombin generation in a dose-dependent manner, which was efficiently inhibited by annexin V, but not by anti-tissue factor antibodies, indicating that it was primarily due to the exposure of phosphatidylserine on platelet EVs. Platelet EVs exhibited higher thrombogenicity than EVs from unstimulated monocytic THP-1 cells, but blockade of contact activation significantly reduced thrombin generation by platelet EVs. Stimulation of monocytic cells with lipopolysaccharide enhanced their thrombogenicity both in the presence and in the absence of contact activation, and thrombin generation was efficiently blocked by anti-tissue factor antibodies. Our study provides evidence that irrespective of their cellular origin, EVs support the propagation of coagulation via the exposure of phosphatidylserine, while the expression of functional tissue factor on EVs appears to be limited to pathological conditions.

Microparticles in hemostasis and thrombosis.

Nigel Mackman,  Elizabeth Owens (2011)
Blood contains microparticles (MPs) derived from a variety of cell types, including platelets, monocytes, and endothelial cells. In addition, tumors release MPs into the circulation. MPs are formed from membrane blebs that are released from the cell surface by proteolytic cleavage of the cytoskeleton. All MPs are procoagulant because they provide a membrane surface for the assembly of components of the coagulation protease cascade. Importantly, procoagulant activity is increased by the presence of anionic phospholipids, particularly phosphatidylserine (PS), and the procoagulant protein tissue factor (TF), which is the major cellular activator of the clotting cascade. High levels of platelet-derived PS(+) MPs are present in healthy individuals, whereas the number of TF(+), PS(+) MPs is undetectable or very low. However, levels of PS(+), TF(+) MPs are readily detected in a variety of diseases, and monocytes appear to be the primary cellular source. In cancer, PS(+), TF(+) MPs are derived from tumors and may serve as a useful biomarker to identify patients at risk for venous thrombosis. This review will summarize our current knowledge of the role of procoagulant MPs in hemostasis and thrombosis.

René J Berckmans,  Augueste Sturk,  Erik Hack … (2001)
We determined the numbers, cellular origin and thrombin-generating properties of microparticles in healthy individuals (n = 15). Microparticles, isolated from fresh blood samples and identified by flow cytometry, originated from platelets [237 x 10(6)/L (median; range 116-565)], erythrocytes (28 x 10(6)/L; 13-46), granulocytes (46 x 10(6)/L; 16-94) and endothelial cells (64 x 10(6)/L; 16-136). They bound annexin V, indicating surface exposure of phosphatidylserine, and supported coagulation in vitro. Interestingly, coagulation occurred via tissue factor (TF)-independent pathways, because antibodies against TF or factor (F)VII were ineffective. In contrast, in our in vitro experiments coagulation was partially inhibited by antibodies against FXII (12%, p = 0.006), FXI (36%, p <0.001), FIX (28%, p <0.001) or FVIII (32%, p <0.001). Both the number of annexin V-positive microparticles present in plasma and the thrombin-generating capacity inversely correlated to the plasma concentrations of thrombin-antithrombin complex (r = -0.49, p = 0.072 and r = -0.77, p = 0.001, respectively), but did not correlate to prothrombin fragment F1+2 (r = -0.002, p = 0.99). The inverse correlations between the number of microparticles and their thrombin-forming capacity and the levels of thrombin-antithrombin complex in plasma may indicate that microparticles present in the circulation of healthy individuals have an anticoagulant function by promoting the generation of low amounts of thrombin that activate protein C. We conclude that microparticles in blood from healthy individuals support thrombin generation via TF- and FVII-independent pathways, and which may have an anticoagulant function.