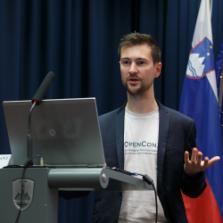 Jon completed his PhD at Imperial College London in the Department of Earth Science and Engineering, where he won the prestigious Janet Watson award for research excellence. His research focused on patterns of diversity and extinction in deep time and the biological, geological and environmental drivers of these patterns, as well as the early evolution of crocodiles. He is currently the founder of paleorXiv, a digital publishing platform, and the Open Science MOOC, a peer-to-peer community around open research practices.

He is also a PLOS Paleo Community Editor, freelance science writer and consultant, and author of the kids dinosaur book Excavate Dinosaurs! He is also an independent researcher affiliated with IGDORE, where he won a travel award to work with them at their campus in Bali. He is also the recipient of a Shuttleworth Foundation flash grant, and the Jean-Claude Guedon 2018 award for his work on peer review. He is an ambassador for the Center for Open Science and ASAPbio, and a member of the Mozilla Open Leadership Cohort. Jon is also Executive Editor for the journal Geoscience Communication, and Editor for Publications and the Journal of Evidence-Based Healthcare.

For 2 years, Jon was also the Communications Director for Berlin-based tech startup ScienceOpen. Jon is also passionate about open science communication and strongly believes that science should be as accessible as possible. He takes a deep interest in following and talking about current trends in open science and scholarly communication, and has published papers on Open Access and peer review. As part of this, Jon also helped lead a campaign against privatisation of knowledge with Education International, and continues to challenge the scholarly publishing industry and its practices.

Now, he is a research fellow at the Center for Research and Interdisciplinarity in Paris, where he works on Palaeontology and the Future of Open Scholarly Communication.

Center for Research and Interdisciplinarity

University of Manchester, Department of Earth, Atmospheric, and Environmental Science

Jon has just completed his PhD at Imperial College London in the Department of Earth Science and Engineering. His research focused on patterns of biodiversity and extinction in deep time and the biological and environmental drivers of these patterns. He is a PLOS Paleo Community Editor, am the Communications Director for ScienceOpen, a freelance science writer and consultant, and author of the kids dinosaur book Excavate Dinosaurs!