Community empowerment and involvement of female sex workers in targeted sexual and reproductive health interventions in Africa: a systematic review 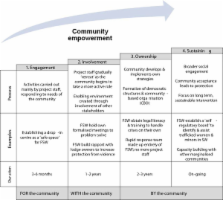 In November 2012 we searched Medline and Web of Science for studies of FSW health services in Africa, and consulted experts and websites of international organisations. Titles and abstracts were screened to identify studies describing relevant services, using a broad definition of empowerment. Data were extracted on service-delivery models and degree of FSW involvement, and analysed with reference to a four-stage framework developed by Ashodaya. This conceptualises community empowerment as progressing from (1) initial engagement with the sex worker community, to (2) community involvement in targeted activities, to (3) ownership, and finally, (4) sustainability of action beyond the community.

Of 5413 articles screened, 129 were included, describing 42 projects. Targeted services in FSW ‘hotspots’ were generally isolated and limited in coverage and scope, mostly offering only free condoms and STI treatment. Many services were provided as part of research activities and offered via a clinic with associated community outreach. Empowerment processes were usually limited to peer-education (stage 2 of framework). Community mobilisation as an activity in its own right was rarely documented and while most projects successfully engaged communities, few progressed to involvement, community ownership or sustainability. Only a few interventions had evolved to facilitate collective action through formal democratic structures (stage 3). These reported improved sexual negotiating power and community solidarity, and positive behavioural and clinical outcomes. Sustainability of many projects was weakened by disunity within transient communities, variable commitment of programmers, low human resource capacity and general resource limitations.

Most FSW SRH projects in Africa implemented participatory processes consistent with only the earliest stages of community empowerment, although isolated projects demonstrate proof of concept for successful empowerment interventions in African settings.

Kaye Wellings,  Martine Collumbien,  Emma Slaymaker … (2006)
Research aimed at investigating sexual behaviour and assessing interventions to improve sexual health has increased in recent decades. The resulting data, despite regional differences in quantity and quality, provide a historically unique opportunity to describe patterns of sexual behaviour and their implications for attempts to protect sexual health at the beginning of the 21st century. In this paper we present original analyses of sexual behaviour data from 59 countries for which they were available. The data show substantial diversity in sexual behaviour by region and sex. No universal trend towards earlier sexual intercourse has occurred, but the shift towards later marriage in most countries has led to an increase in premarital sex, the prevalence of which is generally higher in developed countries than in developing countries, and is higher in men than in women. Monogamy is the dominant pattern everywhere, but having had two or more sexual partners in the past year is more common in men than in women, and reported rates are higher in industrialised than in non-industrialised countries. Condom use has increased in prevalence almost everywhere, but rates remain low in many developing countries. The huge regional variation indicates mainly social and economic determinants of sexual behaviour, which have implications for intervention. Although individual behaviour change is central to improving sexual health, efforts are also needed to address the broader determinants of sexual behaviour, particularly those that relate to the social context. The evidence from behavioural interventions is that no general approach to sexual-health promotion will work everywhere and no single-component intervention will work anywhere. Comprehensive behavioural interventions are needed that take account of the social context in mounting individual-level programmes, attempt to modify social norms to support uptake and maintenance of behaviour change, and tackle the structural factors that contribute to risky sexual behaviour.

P. Newman,  Siddhartha S. Jana,  Mary Rotheram-Borus … (2004)
High rates of HIV infection among sex workers in India indicate the importance of understanding the process of establishing a sustainable community intervention program. The Sonagachi Project, based in Calcutta, India, has been associated with lower HIV rates among sex workers as compared to other urban centers in India. The program defined HIV as an occupational health problem and included multifaceted, multilevel interventions addressing community (having a high-status advocate; addressing environmental barriers and resources), group (changing social relationships), and individual factors (improving skills and competencies related to HIV prevention and treatment). The Sonagachi Project's core concepts and strategies evolved as community needs were expressed and defined. In particular, the program was not initially conceptualized as a community empowerment project but emerged over time, allowing for project sustainability. Project components appear to be replicable across settings within India and worldwide.