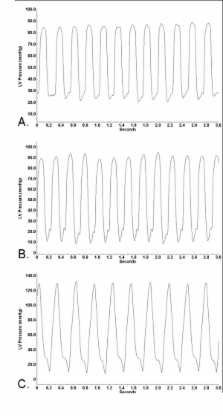 Heart failure is a critical condition that affects many people and often results from left ventricular dysfunction. Numerous studies investigating this condition have been performed using various model systems. To do so, investigators must be able to accurately measure myocardial performance in order to determine the degree of left ventricular function. In this model development study, we employ a wireless telemetry system purchased from Data Sciences International to continuously assess left ventricular function in the rabbit model.

We surgically implanted pressure-sensitive catheters fitted to wireless radio-transmitters into the left ventricle of Dutch-belted rabbits. Following recovery of the animals, we continuously recorded indices of cardiac contractility and ventricular relaxation at baseline for a given time period. The telemetry system allowed us to continuously record baseline left ventricular parameters for the entire recording period. During this time, the animals were unrestrained and fully conscious. The values we recorded are similar to those obtained using other reported methods.

The wireless telemetry system can continuously measure left ventricular pressure, cardiac contractility, and cardiac relaxation in the rabbit model. These results, which were obtained just as baseline levels, substantiate the need for further validation in this model system of left ventricular assessment.

Assessment of cardiac contractility. The relation between the rate of pressure rise and ventricular pressure during isovolumic systole.