The Role of Co-chaperones in Synaptic Proteostasis and Neurodegenerative Disease 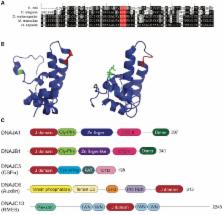 Synapses must be preserved throughout an organism's lifespan to allow for normal brain function and behavior. Synapse maintenance is challenging given the long distances between the termini and the cell body, reliance on axonal transport for delivery of newly synthesized presynaptic proteins, and high rates of synaptic vesicle exo- and endocytosis. Hence, synapses rely on efficient proteostasis mechanisms to preserve their structure and function. To this end, the synaptic compartment has specific chaperones to support its functions. Without proper synaptic chaperone activity, local proteostasis imbalances lead to neurotransmission deficits, dismantling of synapses, and neurodegeneration. In this review, we address the roles of four synaptic chaperones in the maintenance of the nerve terminal, as well as their genetic links to neurodegenerative disease. Three of these are Hsp40 co-chaperones (DNAJs): Cysteine String Protein alpha (CSPα; DNAJC5), auxilin (DNAJC6), and Receptor-Mediated Endocytosis 8 (RME-8; DNAJC13). These co-chaperones contain a conserved J domain through which they form a complex with heat shock cognate 70 (Hsc70), enhancing the chaperone's ATPase activity. CSPα is a synaptic vesicle protein known to chaperone the t-SNARE SNAP-25 and the endocytic GTPase dynamin-1, thereby regulating synaptic vesicle exocytosis and endocytosis. Auxilin binds assembled clathrin cages, and through its interactions with Hsc70 leads to the uncoating of clathrin-coated vesicles, a process necessary for the regeneration of synaptic vesicles. RME-8 is a co-chaperone on endosomes and may have a role in clathrin-coated vesicle endocytosis on this organelle. These three co-chaperones maintain client function by preserving folding and assembly to prevent client aggregation, but they do not break down aggregates that have already formed. The fourth synaptic chaperone we will discuss is Heat shock protein 110 (Hsp110), which interacts with Hsc70, DNAJAs, and DNAJBs to constitute a disaggregase. Hsp110-related disaggregase activity is present at the synapse and is known to protect against aggregation of proteins such as α-synuclein. Congruent with their importance in the nervous system, mutations of these co-chaperones lead to familial neurodegenerative disease. CSPα mutations cause adult neuronal ceroid lipofuscinosis, while auxilin mutations result in early-onset Parkinson's disease, demonstrating their significance in preservation of the nervous system.

F. Ulrich Hartl,  Andreas Bracher,  Manajit Hayer-Hartl (2011)
Most proteins must fold into defined three-dimensional structures to gain functional activity. But in the cellular environment, newly synthesized proteins are at great risk of aberrant folding and aggregation, potentially forming toxic species. To avoid these dangers, cells invest in a complex network of molecular chaperones, which use ingenious mechanisms to prevent aggregation and promote efficient folding. Because protein molecules are highly dynamic, constant chaperone surveillance is required to ensure protein homeostasis (proteostasis). Recent advances suggest that an age-related decline in proteostasis capacity allows the manifestation of various protein-aggregation diseases, including Alzheimer's disease and Parkinson's disease. Interventions in these and numerous other pathological states may spring from a detailed understanding of the pathways underlying proteome maintenance.

T-Coffee: a web server for the multiple sequence alignment of protein and RNA sequences using structural information and homology extension

Paolo Di Tommaso,  Sébastien Moretti,  Ioannis Xenarios … (2011)
This article introduces a new interface for T-Coffee, a consistency-based multiple sequence alignment program. This interface provides an easy and intuitive access to the most popular functionality of the package. These include the default T-Coffee mode for protein and nucleic acid sequences, the M-Coffee mode that allows combining the output of any other aligners, and template-based modes of T-Coffee that deliver high accuracy alignments while using structural or homology derived templates. These three available template modes are Expresso for the alignment of protein with a known 3D-Structure, R-Coffee to align RNA sequences with conserved secondary structures and PSI-Coffee to accurately align distantly related sequences using homology extension. The new server benefits from recent improvements of the T-Coffee algorithm and can align up to 150 sequences as long as 10 000 residues and is available from both http://www.tcoffee.org and its main mirror http://tcoffee.crg.cat.

Walter Schulz-Schaeffer (2010)
Parkinson’s disease (PD) and dementia with Lewy bodies (DLB) are usually associated with loss of dopaminergic neurons. Loss of substantia nigra neurons and presence of Lewy body inclusions in some of the remaining neurons are the hallmark pathology seen in the final stages of the disease. Attempts to correlate Lewy body pathology to either cell death or severity of clinical symptoms, however, have not been successful. While the pathophysiology of the neurodegenerative process can hardly be explained by Lewy bodies, the clinical symptoms do indicate a degenerative process located at the presynapse resulting in a neurotransmitter deficiency. Recently it was shown that 90% or even more of α-synuclein aggregates in DLB cases were located at the presynapses in the form of very small deposits. In parallel, dendritic spines are retracted, whereas the presynapses are relatively preserved, suggesting a neurotransmitter deprivation. The same α-synuclein pathology can be demonstrated for PD. These findings give rise to the notion that not cell death but rather α-synuclein aggregate-related synaptic dysfunction causes the neurodegeneration. This opens new perspectives for understanding PD and DLB. If presynaptic α-synuclein aggregation, not neuronal loss, is the key issue of the neurodegenerative process, then PD and DLB may eventually be treatable in the future. The disease may progress via trans-synaptical spread, suggesting that stem cell transplants are of limited use. Future therapies may focus on the regeneration of synapses.

This article was submitted to Neurodegeneration, a section of the journal Frontiers in Neuroscience