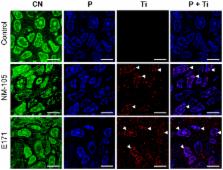 Food-grade titanium dioxide (TiO 2) containing a nanoscale particle fraction (TiO 2-NPs) is approved as a white pigment (E171 in Europe) in common foodstuffs, including confectionary. There are growing concerns that daily oral TiO 2-NP intake is associated with an increased risk of chronic intestinal inflammation and carcinogenesis. In rats orally exposed for one week to E171 at human relevant levels, titanium was detected in the immune cells of Peyer’s patches (PP) as observed with the TiO 2-NP model NM-105. Dendritic cell frequency increased in PP regardless of the TiO 2 treatment, while regulatory T cells involved in dampening inflammatory responses decreased with E171 only, an effect still observed after 100 days of treatment. In all TiO 2-treated rats, stimulation of immune cells isolated from PP showed a decrease in Thelper (Th)-1 IFN-γ secretion, while splenic Th1/Th17 inflammatory responses sharply increased. E171 or NM-105 for one week did not initiate intestinal inflammation, while a 100-day E171 treatment promoted colon microinflammation and initiated preneoplastic lesions while also fostering the growth of aberrant crypt foci in a chemically induced carcinogenesis model. These data should be considered for risk assessments of the susceptibility to Th17-driven autoimmune diseases and to colorectal cancer in humans exposed to TiO 2 from dietary sources.

William Agace,  Alan Mowat,  Allan Mowat (2014)
The intestine represents the largest compartment of the immune system. It is continually exposed to antigens and immunomodulatory agents from the diet and the commensal microbiota, and it is the port of entry for many clinically important pathogens. Intestinal immune processes are also increasingly implicated in controlling disease development elsewhere in the body. In this Review, we detail the anatomical and physiological distinctions that are observed in the small and large intestines, and we suggest how these may account for the diversity in the immune apparatus that is seen throughout the intestine. We describe how the distribution of innate, adaptive and innate-like immune cells varies in different segments of the intestine and discuss the environmental factors that may influence this. Finally, we consider the implications of regional immune specialization for inflammatory disease in the intestine.

Alex Weir,  Paul Westerhoff,  Lars Fabricius … (2012)
Titanium dioxide is a common additive in many food, personal care, and other consumer products used by people, which after use can enter the sewage system and, subsequently, enter the environment as treated effluent discharged to surface waters or biosolids applied to agricultural land, incinerated wastes, or landfill solids. This study quantifies the amount of titanium in common food products, derives estimates of human exposure to dietary (nano-) TiO(2), and discusses the impact of the nanoscale fraction of TiO(2) entering the environment. The foods with the highest content of TiO(2) included candies, sweets, and chewing gums. Among personal care products, toothpastes and select sunscreens contained 1% to >10% titanium by weight. While some other crèmes contained titanium, despite being colored white, most shampoos, deodorants, and shaving creams contained the lowest levels of titanium (<0.01 μg/mg). For several high-consumption pharmaceuticals, the titanium content ranged from below the instrument detection limit (0.0001 μg Ti/mg) to a high of 0.014 μg Ti/mg. Electron microscopy and stability testing of food-grade TiO(2) (E171) suggests that approximately 36% of the particles are less than 100 nm in at least one dimension and that it readily disperses in water as fairly stable colloids. However, filtration of water solubilized consumer products and personal care products indicated that less than 5% of the titanium was able to pass through 0.45 or 0.7 μm pores. Two white paints contained 110 μg Ti/mg while three sealants (i.e., prime coat paint) contained less titanium (25 to 40 μg Ti/mg). This research showed that, while many white-colored products contained titanium, it was not a prerequisite. Although several of these product classes contained low amounts of titanium, their widespread use and disposal down the drain and eventually to wastewater treatment plants (WWTPs) deserves attention. A Monte Carlo human exposure analysis to TiO(2) through foods identified children as having the highest exposures because TiO(2) content of sweets is higher than other food products and that a typical exposure for a US adult may be on the order of 1 mg Ti per kilogram body weight per day. Thus, because of the millions of tons of titanium-based white pigment used annually, testing should focus on food-grade TiO(2) (E171) rather than that adopted in many environmental health and safety tests (i.e., P25), which is used in much lower amounts in products less likely to enter the environment (e.g., catalyst supports, photocatalytic coatings).

Hongbo Shi,  Ruth Magaye,  Vincent Castranova … (2013)
Titanium dioxide (TiO2) nanoparticles (NPs) are manufactured worldwide in large quantities for use in a wide range of applications. TiO2 NPs possess different physicochemical properties compared to their fine particle (FP) analogs, which might alter their bioactivity. Most of the literature cited here has focused on the respiratory system, showing the importance of inhalation as the primary route for TiO2 NP exposure in the workplace. TiO2 NPs may translocate to systemic organs from the lung and gastrointestinal tract (GIT) although the rate of translocation appears low. There have also been studies focusing on other potential routes of human exposure. Oral exposure mainly occurs through food products containing TiO2 NP-additives. Most dermal exposure studies, whether in vivo or in vitro, report that TiO2 NPs do not penetrate the stratum corneum (SC). In the field of nanomedicine, intravenous injection can deliver TiO2 nanoparticulate carriers directly into the human body. Upon intravenous exposure, TiO2 NPs can induce pathological lesions of the liver, spleen, kidneys, and brain. We have also shown here that most of these effects may be due to the use of very high doses of TiO2 NPs. There is also an enormous lack of epidemiological data regarding TiO2 NPs in spite of its increased production and use. However, long-term inhalation studies in rats have reported lung tumors. This review summarizes the current knowledge on the toxicology of TiO2 NPs and points out areas where further information is needed.