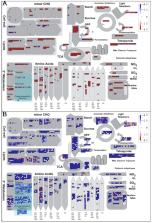 Chinese fir ( Cunninghamia lanceolata (Lamb.) Hook.) is one of the most important coniferous evergreen tree species in South China due to its desirable attributes of fast growth and production of strong and hardy wood. However, the yield of Chinese fir is often inhibited by aluminum (Al) toxicity in acidic soils of South China. Understanding the molecular mechanisms of Chinese fir root responses to Al toxicity might help to further increase its productivity. Here we used the Illumina Hiseq4000 platform to carry out transcriptome analysis of Chinese fir roots subjected to Al toxicity conditions. A total of 88.88 Gb of clean data was generated from 12 samples and assembled into 105,732 distinct unigenes. The average length and N50 length of these unigenes were 839 bp and 1411 bp, respectively. Among them, 58362 unigenes were annotated through searches of five public databases (Nr: NCBI non-redundant protein sequences, Swiss-Prot: A manually annotated and reviewed protein sequence database, GO: Gene Ontology, KOG/COG: Clusters of Orthologous Groups of proteins, and KEGG: the Kyoto Encyclopedia of Genes and Genomes database), which led to association of unigenes with 44 GO terms. Plus, 1615 transcription factors (TFs) were functionally classified. Then, differentially expressed genes (DEGs, |log 2(fold change)| ≥ 1 and FDR ≤ 0.05) were identified in comparisons labelled TC1 (CK-72 h/CK-1 h) and TC2 (Al-72 h/Al-1 h). A large number of TC2 DEGs group were identified, with most being down-regulated under Al stress, while TC1 DEGs were primarily up-regulated. Combining GO, KEGG, and MapMan pathway analysis indicated that many DEGs are involved in primary metabolism, including cell wall metabolism and lipid metabolism, while other DEGs are associated with signaling pathways and secondary metabolism, including flavonoids and phenylpropanoids metabolism. Furthermore, TFs identified in TC1 and TC2 DEGs represented 21 and 40 transcription factor families, respectively. Among them, expression of bHLH, C2H2, ERF, bZIP, GRAS, and MYB TFs changed considerably under Al stress, which suggests that these TFs might play crucial roles in Chinese fir root responses to Al toxicity. These differentially expressed TFs might act in concert with flavonoid and phenylpropanoid pathway genes in fulfilling of key roles in Chinese fir roots responding to Al toxicity.

The role of root exudates in aluminium resistance and silicon-induced amelioration of aluminium toxicity in three varieties of maize (Zea mays L.).

Stephen Kidd,  J-R Barcelo,  B Gunsé … (2001)
Aluminium (Al) toxicity is widely considered to be the most important growth-limiting factor for plants in strongly acid soils (pH<5.0). The inhibition of root elongation in three varieties of maize (Zea mays L. vars Clavito, HS701b and Sikuani) was followed over the first 48 h of Al treatment, and during the initial 10 h elongation was determined on an hourly basis. The silicon (Si)-induced amelioration of Al toxicity was investigated by pre-treating seedlings for 72 h in nutrient solutions with 1000 microM Si before transfer into solutions with 0, 20 or 50 microM Al (without Si). Plants were either grown in complete low ionic strength nutrient solutions (CNS) or in low salt solutions of 0.4 mM CaCl2 (LSS). In addition, the role of root exudation of organic compounds as a mechanism of Si-induced alleviation of Al toxicity was investigated. Aluminium-induced inhibition of root elongation in the maize var. HS701b was observed within 1 h of Al exposure. After a lag time of at least 8 h, Si-induced alleviation of Al toxicity was observed in this variety when grown in LSS. In the Al-resistant var. Sikuani, Al-resistance was only observed after exposure to 50 microM Al, and not after exposure to 20 microM Al, suggesting that there exists a threshold Al concentration before the mechanisms of Al resistance are activated. Aluminium stimulated root exudation of oxalic acid in all three varieties, but exudate concentrations did not increase with either Al resistance or with Si pretreatment. Aluminium and Si triggered release of catechol and of the flavonoid-type phenolics: catechin, and quercetin. In the Al-resistant variety, Sikuani, Al-exposed plants pretreated with Si exuded up to 15 times more phenolics than those plants not pretreated with Si. The flavonoid-type phenolics, to date unconsidered, appear to play a role in the mechanism(s) of Si-induced amelioration of Al toxicity.

Identity of the rhizotoxic aluminium species

Tianzuo Wang,  Qiuying Tian,  Hao Zhang … (2012)
MicroRNAs (miRNAs) play important roles in response of plants to biotic and abiotic stresses. Aluminum (Al) toxicity is a major factor limiting plant growth in acidic soils. However, there has been limited report on the involvement of miRNAs in response of plants to toxic Al(3+). To identify Al(3+)-responsive miRNAs at whole-genome level, high-throughput sequencing technology was used to sequence libraries constructed from root apices of the model legume plant Medicago truncatula treated with and without Al(3+). High-throughput sequencing of the control and two Al(3+)-treated libraries led to generation of 17.1, 14.1 and 17.4 M primary reads, respectively. We identified 326 known miRNAs and 21 new miRNAs. Among the miRNAs, expression of 23 miRNAs was responsive to Al(3+), and the majority of Al(3+)-responsive mRNAs was down-regulated. We further classified the Al(3+)-responsive miRNAs into three groups based on their expression patterns: rapid-responsive, late-responsive and sustained-responsive miRNAs. The majority of Al(3+)-responsive miRNAs belonged to the 'rapid-responsive' category, i.e. they were responsive to short-term, but not long-term Al(3+) treatment. The Al(3+)-responsive miRNAs were also verified by quantitative real-time PCR. The potential targets of the 21 new miRNAs were predicted to be involved in diverse cellular processes in plants, and their potential roles in Al(3+)-induced inhibition of root growth were discussed. These findings provide valuable information for functional characterization of miRNAs in Al(3+) toxicity and tolerance.