Abdominal angiostrongyliasis in the Americas: fifty years since the discovery of a new metastrongylid species, Angiostrongylus costaricensis

Angiostrongylus costaricensis is a zoonotic parasitic nematode described for the first time in 1971 by Pedro Morera and Rodolfo Céspedes in Costa Rica. This parasite causes an infection known as abdominal angiostrongyliasis, affecting mainly school-aged children and young adults. Infection with A. costaricensis has been associated with a myriad of rodent and mollusk species in the Americas and the Caribbean, as its natural hosts and reservoirs. In this commemorative review, we highlight the extensive research collected through a 50-year journey, which includes ecological, pathological, and molecular studies on A. costaricensis and its implicated disease. We also identify major knowledge gaps in its evolutionary history, the ecological role of imported and invasive mollusk species, and immune response. We propose that the advent of -omics analyses will allow us to gather novel information regarding A. costaricensis biology and infection dynamics, as well as to promote the design of much-needed sensitive and specific diagnostic tools. 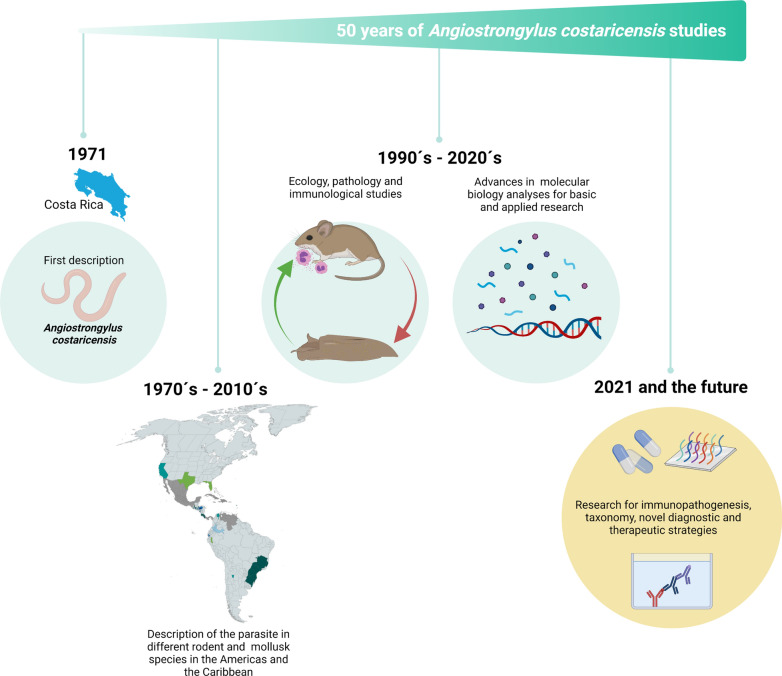 Life history and redescription of Angiostrongylus costaricensis Morera and Céspedes, 1971.

The genome of Onchocerca volvulus, agent of river blindness

James A. Cotton,  Sasisekhar Bennuru,  Alexandra Grote … (2016)
Human onchocerciasis is a serious neglected tropical disease caused by the filarial nematode Onchocerca volvulus that can lead to blindness and chronic disability. Control of the disease relies largely on mass administration of a single drug, and the development of new drugs and vaccines depends on a better knowledge of parasite biology. Here, we describe the chromosomes of O. volvulus and its Wolbachia endosymbiont. We provide the highest-quality sequence assembly for any parasitic nematode to date, giving a glimpse into the evolution of filarial parasite chromosomes and proteomes. This resource was used to investigate gene families with key functions that could be potentially exploited as targets for future drugs. Using metabolic reconstruction of the nematode and its endosymbiont, we identified enzymes that are likely to be essential for O. volvulus viability. In addition, we have generated a list of proteins that could be targeted by Federal-Drug-Agency-approved but repurposed drugs, providing starting points for anti-onchocerciasis drug development.