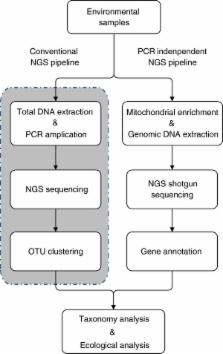 Mitochondrial enrichment directly followed by Illumina shotgun sequencing, at an ultra-high sequence volume, enabled the recovery of Cytochrome c Oxidase subunit 1 ( COI) barcode sequences, which allowed for the estimation of species composition at high fidelity for a terrestrial insect community. With 15.5 Gbp Illumina data, approximately 97% and 92% were detected out of the 37 input Operational Taxonomic Units (OTUs), whether the reference barcode library was used or not, respectively, while only 1 novel OTU was found for the latter. Additionally, relatively strong correlation between the sequencing volume and the total biomass was observed for species from the bulk sample, suggesting a potential solution to reveal relative abundance.

The ability of the new Illumina PCR-free pipeline for DNA metabarcoding to detect small arthropod specimens and its tendency to avoid most, if not all, false positives suggests its great potential in biodiversity-related surveillance, such as in biomonitoring programs. However, further improvement for mitochondrial enrichment is likely needed for the application of the new pipeline in analyzing arthropod communities at higher diversity.

Pierre Taberlet, Ludovic Gielly, Guy Pautou … (1991)
Six primers for the amplification of three non-coding regions of chloroplast DNA via the polymerase chain reaction (PCR) have been designed. In order to find out whether these primers were universal, we used them in an attempt to amplify DNA from various plant species. The primers worked for most species tested including algae, bryophytes, pteridophytes, gymnosperms and angiosperms. The fact that they amplify chloroplast DNA non-coding regions over a wide taxonomic range means that these primers may be used to study the population biology (in supplying markers) and evolution (inter- and probably intraspecific phylogenies) of plants.

ITS as an environmental DNA barcode for fungi: an in silico approach reveals potential PCR biases

Eva Bellemain, Tor Carlsen, Christian Brochmann … (2010)
Background During the last 15 years the internal transcribed spacer (ITS) of nuclear DNA has been used as a target for analyzing fungal diversity in environmental samples, and has recently been selected as the standard marker for fungal DNA barcoding. In this study we explored the potential amplification biases that various commonly utilized ITS primers might introduce during amplification of different parts of the ITS region in samples containing mixed templates ('environmental barcoding'). We performed in silico PCR analyses with commonly used primer combinations using various ITS datasets obtained from public databases as templates. Results Some of the ITS primers, such as ITS1-F, were hampered with a high proportion of mismatches relative to the target sequences, and most of them appeared to introduce taxonomic biases during PCR. Some primers, e.g. ITS1-F, ITS1 and ITS5, were biased towards amplification of basidiomycetes, whereas others, e.g. ITS2, ITS3 and ITS4, were biased towards ascomycetes. The assumed basidiomycete-specific primer ITS4-B only amplified a minor proportion of basidiomycete ITS sequences, even under relaxed PCR conditions. Due to systematic length differences in the ITS2 region as well as the entire ITS, we found that ascomycetes will more easily amplify than basidiomycetes using these regions as targets. This bias can be avoided by using primers amplifying ITS1 only, but this would imply preferential amplification of 'non-dikarya' fungi. Conclusions We conclude that ITS primers have to be selected carefully, especially when used for high-throughput sequencing of environmental samples. We suggest that different primer combinations or different parts of the ITS region should be analyzed in parallel, or that alternative ITS primers should be searched for.