Dengue, Urbanization and Globalization: The Unholy Trinity of the 21 st Century 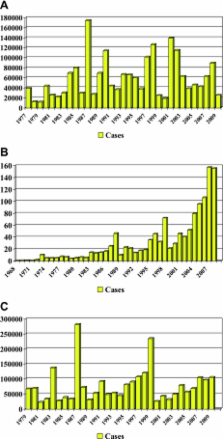 Dengue is the most important arboviral disease of humans with over half of the world’s population living in areas of risk. The frequency and magnitude of epidemic dengue have increased dramatically in the past 40 years as the viruses and the mosquito vectors have both expanded geographically in the tropical regions of the world. There are many factors that have contributed to this emergence of epidemic dengue, but only three have been the principal drivers: 1) urbanization, 2) globalization and 3) lack of effective mosquito control. The dengue viruses have fully adapted to a human- Aedes aegypti-human transmission cycle, in the large urban centers of the tropics, where crowded human populations live in intimate association with equally large mosquito populations. This setting provides the ideal home for maintenance of the viruses and the periodic generation of epidemic strains. These cities all have modern airports through which 10s of millions of passengers pass each year, providing the ideal mechanism for transportation of viruses to new cities, regions and continents where there is little or no effective mosquito control. The result is epidemic dengue. This paper discusses this unholy trinity of drivers, along with disease burden, prevention and control and prospects for the future.

Prospects for a dengue virus vaccine.

Stephen Whitehead,  Joseph Blaney,  Patrick B. Murphy … (2007)
The number of cases of severe dengue disease continues to grow in endemic areas of southeast Asia, Central and South America, and other subtropical regions. Children bear the greatest burden of disease, and the development of an effective vaccine remains a global public health priority. A tetravalent vaccine is urgently needed and must be effective against all four dengue virus serotypes, be cost-effective and provide long-term protection. In this Review we discuss the unique immunological concerns in dengue virus vaccine development and the current prospects for the development of an acceptable vaccine, a goal that is likely to be reached in the near future.

Economic Impact of Dengue Illness in the Americas

Donald S. Shepard,  Laurent Coudeville,  Yara A. Halasa … (2011)
The growing burden of dengue in endemic countries and outbreaks in previously unaffected countries stress the need to assess the economic impact of this disease. This paper synthesizes existing studies to calculate the economic burden of dengue illness in the Americas from a societal perspective. Major data sources include national case reporting data from 2000 to 2007, prospective cost of illness studies, and analyses quantifying underreporting in national routine surveillance systems. Dengue illness in the Americas was estimated to cost $2.1 billion per year on average (in 2010 US dollars), with a range of $1–4 billion in sensitivity analyses and substantial year to year variation. The results highlight the substantial economic burden from dengue in the Americas. The burden for dengue exceeds that from other viral illnesses, such as human papillomavirus (HPV) or rotavirus. Because this study does not include some components (e.g., vector control), it may still underestimate total economic consequences of dengue.