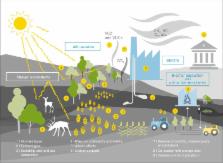 Current mitigation efforts and existing future commitments are inadequate to accomplish the Paris Agreement temperature goals. In light of this, research and debate are intensifying on the possibilities of additionally employing proposed climate geoengineering technologies, either through atmospheric carbon dioxide removal or farther-reaching interventions altering the Earth’s radiative energy budget. Although research indicates that several techniques may eventually have the physical potential to contribute to limiting climate change, all are in early stages of development, involve substantial uncertainties and risks, and raise ethical and governance dilemmas. Based on present knowledge, climate geoengineering techniques cannot be relied on to significantly contribute to meeting the Paris Agreement temperature goals.

Research and debate are intensifying on complementing CO 2 emissions reductions with hypothetical climate geoengineering techniques. Here, the authors assess their potentials, uncertainties and risks, and show that they cannot yet be relied on to significantly contribute to meeting the Paris Agreement temperature goals.

Christopher W. Hunt,  Corinne Le Quéré,  Robbie Andrew … (2018)
Accurate assessment of anthropogenic carbon dioxide (CO 2 ) emissions and their redistribution among the atmosphere, ocean, and terrestrial biosphere – the global carbon budget – is important to better understand the global carbon cycle, support the development of climate policies, and project future climate change. Here we describe data sets and methodology to quantify the five major components of the global carbon budget and their uncertainties. CO 2 emissions from fossil fuels and industry ( E FF ) are based on energy statistics and cement production data, respectively, while emissions from land-use change ( E LUC ), mainly deforestation, are based on land-cover change data and bookkeeping models. The global atmospheric CO 2 concentration is measured directly and its rate of growth ( G ATM ) is computed from the annual changes in concentration. The ocean CO 2 sink ( S OCEAN ) and terrestrial CO 2 sink ( S LAND ) are estimated with global process models constrained by observations. The resulting carbon budget imbalance ( B IM ), the difference between the estimated total emissions and the estimated changes in the atmosphere, ocean, and terrestrial biosphere, is a measure of imperfect data and understanding of the contemporary carbon cycle. All uncertainties are reported as ±1 σ . For the last decade available (2007–2016), E FF was 9.4 ± 0.5 GtC yr −1 , E LUC 1.3 ± 0.7 GtC yr −1 , G ATM 4.7 ± 0.1 GtC yr −1 , S OCEAN 2.4 ± 0.5 GtC yr −1 , and S LAND 3.0 ± 0.8 GtC yr −1 , with a budget imbalance B IM of 0.6 GtC yr −1 indicating overestimated emissions and/or underestimated sinks. For year 2016 alone, the growth in E FF was approximately zero and emissions remained at 9.9 ± 0.5 GtC yr −1 . Also for 2016, E LUC was 1.3 ± 0.7 GtC yr −1 , G ATM was 6.1 ± 0.2 GtC yr −1 , S OCEAN was 2.6 ± 0.5 GtC yr −1 , and S LAND was 2.7 ± 1.0 GtC yr −1 , with a small B IM of −0.3 GtC. G ATM continued to be higher in 2016 compared to the past decade (2007–2016), reflecting in part the high fossil emissions and the small S LAND consistent with El Niño conditions. The global atmospheric CO 2 concentration reached 402.8 ± 0.1 ppm averaged over 2016. For 2017, preliminary data for the first 6–9 months indicate a renewed growth in E FF of +2.0 % (range of 0.8 to 3.0 %) based on national emissions projections for China, USA, and India, and projections of gross domestic product (GDP) corrected for recent changes in the carbon intensity of the economy for the rest of the world. This living data update documents changes in the methods and data sets used in this new global carbon budget compared with previous publications of this data set (Le Quéré et al., 2016, 2015b, a, 2014, 2013). All results presented here can be downloaded from https://doi.org/10.18160/GCP-2017 (GCP, 2017).