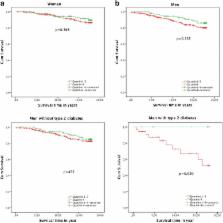 The aim of the present study was to investigate the associations between endogenous testosterone concentrations and the incidence of acute myocardial infarction (AMI) in men and women with and without type 2 diabetes.

The study comprised 1109 subjects ≥40 years of age (mean age 62 ± 12 years) participating in a baseline survey in Sweden in 1993–94. Information about smoking habits and physical activity was obtained using validated questionnaires. Serum concentrations of testosterone and sex hormone-binding globulin (SHBG) were obtained using radioimmunoassay. Diagnosis of type 2 diabetes was based on WHO’s 1985 criteria. Individual patient information on incident AMI was ascertained by record linkage with national inpatient and mortality registers from baseline through 2011.

The prevalence of type 2 diabetes at baseline was 10.0 % in men and 7.5 % in women. During a mean follow-up of 14.1 years (±5.3), there were 74 events of AMI in men and 58 in women. In age-adjusted Cox models, a significant inverse association between concentrations of testosterone and AMI-morbidity was found in men with type 2 diabetes (HR = 0.86 CI (0.75–0.98)). In a final model also including waist-to-hip ratio, systolic blood pressure, total cholesterol and active smoking, the association still remained statistically significant (HR = 0.754 CI (0.61–0.92)).

Low concentrations of testosterone predicted AMI in men with type 2 diabetes independent of other risk factors. Trials with testosterone investigating the effect regarding cardiovascular outcome are still lacking. Future trials in this field should take into account a modification effect of diabetes.

A critical evaluation of simple methods for the estimation of free testosterone in serum.

Randal Kaufman,  Mechteld A. R. Vermeulen,  L. F. Verdonck (1999)
The free and nonspecifically bound plasma hormone levels generally reflect the clinical situation more accurately than total plasma hormone levels. Hence, it is important to have reliable indexes of these fractions. The apparent free testosterone (T) concentration obtained by equilibrium dialysis (AFTC) as well as the fraction of serum T not precipitated by 50% ammonium sulfate concentration (non-SHBG-T; SHBG, sex hormone-binding globulin), often referred to as bioavailable T, appear to represent reliable indexes of biologically readily available T, but are not well suited for clinical routine, being too time consuming. Several other parameters have been used without complete validation, however: direct immunoassay of free T with a labeled T analog (aFT), calculation of free T (FT) from total T and immunoassayed SHBG concentrations (iSHBG), and the free androgen index (FAI = the ratio 100T/iSHBG). In the view of substantial discrepancies in the literature concerning the free or bioavailable T levels, we compared AFTC, FT, aFT, FAI, and non-SHBG-T levels in a large number of sera with SHBG capacities varying from low, as in hirsute women, to extremely high as in hyperthyroidism. All these indexes of bioavailable T correlated significantly with the AFTC concentration; AFTC and FT values were almost identical under all conditions studied, except during pregnancy. Values for aFT, however, were only a fraction of either AFTC or FT, the fraction varying as a function of SHBG levels. Also, the FAI/AFTC ratio varied as a function of the SHBG levels, and hence, neither aFT nor FAI is a reliable index of bioavailable T. The FT value, obtained by calculation from T and SHBG as determined by immunoassay, appears to be a rapid, simple, and reliable index ofbioavailable T, comparable to AFTC and suitable for clinical routine, except in pregnancy. During pregnancy, estradiol occupies a substantial part of SHBG-binding sites, so that SHBG as determined by immunoassay overestimates the actual binding capacity, which in pregnancy sera results in calculated FT values that are lower than AFTC. The nonspecifically bound T, calculated from FT, correlated highly significantly with and was almost identical to the values of non-SHBG-T obtained by ammonium sulfate precipitation, testifying to the clinical value of FT calculated from iSHBG.

S Harman,  Aislinn Pearson,   … (2001)
Many studies have shown cross-sectional (and two small studies, longitudinal) declines in total and/or free testosterone (T) levels, with age, in men. The extent to which decline in T is the result of the aging process per se, as opposed to chronic illness, medication use, and other age-related factors, remains controversial. The frequency with which aging leads to T levels consistent with hypogonadism has also not been defined. These issues bear on the potential use of T replacement in aging men, because aging and hypogonadism have, in common, reduced bone and lean body mass and muscle strength and increased total and abdominal fat. We measured T and sex hormone-binding globulin (SHBG), by RIA, in stored samples from 890 men in the Baltimore Longitudinal Study on Aging. Using a mixed-effects model, we found independent effects of age and date of sampling to reduce T levels. After compensating for date effects, which investigation suggested was artifactual, we observed significant, independent, age-invariant, longitudinal effects of age on both T and free T index (free T index = T/SHBG), with an average change of -0.124 nmol/L.yr and -0.0049 nmol T/nmol SHBG.yr. T, but not free T index, also decreased with increasing body mass index. Use of beta-blocking drugs was associated with higher T and higher free T index levels. Using total T criteria, incidence of hypogonadal T levels increased to about 20% of men over 60, 30% over 70 and 50% over 80 yr of age, and even greater percentages when free T index criteria were employed. Our observations of health factor independent, age-related longitudinal decreases in T and free T, resulting in a high frequency of hypogonadal values, suggest that further investigation of T replacement in aged men, perhaps targeted to those with the lowest serum T concentrations, are justified.