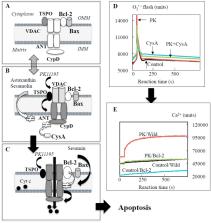 In aging and neurodegenerative diseases, loss of distinct type of neurons characterizes disease-specific pathological and clinical features, and mitochondria play a pivotal role in neuronal survival and death. Mitochondria are now considered as the organelle to modulate cellular signal pathways and functions, not only to produce energy and reactive oxygen species. Oxidative stress, deficit of neurotrophic factors, and multiple other factors impair mitochondrial function and induce cell death. Multi-functional plant polyphenols, major groups of phytochemicals, are proposed as one of most promising mitochondria-targeting medicine to preserve the activity and structure of mitochondria and neurons. Polyphenols can scavenge reactive oxygen and nitrogen species and activate redox-responsible transcription factors to regulate expression of genes, coding antioxidants, anti-apoptotic Bcl-2 protein family, and pro-survival neurotrophic factors. In mitochondria, polyphenols can directly regulate the mitochondrial apoptosis system either in preventing or promoting way. Polyphenols also modulate mitochondrial biogenesis, dynamics (fission and fusion), and autophagic degradation to keep the quality and number. This review presents the role of polyphenols in regulation of mitochondrial redox state, death signal system, and homeostasis. The dualistic redox properties of polyphenols are associated with controversial regulation of mitochondrial apoptosis system involved in the neuroprotective and anti-carcinogenic functions. Mitochondria-targeted phytochemical derivatives were synthesized based on the phenolic structure to develop a novel series of neuroprotective and anticancer compounds, which promote the bioavailability and effectiveness. Phytochemicals have shown the multiple beneficial effects in mitochondria, but further investigation is required for the clinical application.

Mutations in the mitochondrial GTPase mitofusin 2 cause Charcot-Marie-Tooth neuropathy type 2A.

Peter F. Davies,  Philippe Marambaud,  Haitian Zhao (2005)
Several epidemiological studies indicate that moderate consumption of wine is associated with a lower incidence of Alzheimer's disease. Wine is enriched in antioxidant compounds with potential neuroprotective activities. However, the exact molecular mechanisms involved in the beneficial effects of wine intake on the neurodegenerative process in Alzheimer's disease brain remain to be clearly defined. Here we show that resveratrol (trans-3,4',5-trihydroxystilbene), a naturally occurring polyphenol mainly found in grapes and red wine, markedly lowers the levels of secreted and intracellular amyloid-beta (Abeta) peptides produced from different cell lines. Resveratrol does not inhibit Abeta production, because it has no effect on the Abeta-producing enzymes beta- and gamma-secretases, but promotes instead intracellular degradation of Abeta via a mechanism that involves the proteasome. Indeed, the resveratrol-induced decrease of Abeta could be prevented by several selective proteasome inhibitors and by siRNA-directed silencing of the proteasome subunit beta5. These findings demonstrate a proteasome-dependent anti-amyloidogenic activity of resveratrol and suggest that this natural compound has a therapeutic potential in Alzheimer's disease.

BDNF-based synaptic repair as a disease-modifying strategy for neurodegenerative diseases.

Guhan Nagappan,  Pradeep Nathan,  Xiaoming Guan … (2013)
Increasing evidence suggests that synaptic dysfunction is a key pathophysiological hallmark in neurodegenerative disorders, including Alzheimer's disease. Understanding the role of brain-derived neurotrophic factor (BDNF) in synaptic plasticity and synaptogenesis, the impact of the BDNF Val66Met polymorphism in Alzheimer's disease-relevant endophenotypes - including episodic memory and hippocampal volume - and the technological progress in measuring synaptic changes in humans all pave the way for a 'synaptic repair' therapy for neurodegenerative diseases that targets pathophysiology rather than pathogenesis. This article reviews the key issues in translating BDNF biology into synaptic repair therapies.