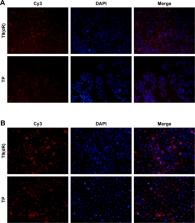 In this study, we report on the development of an effective delivery system for siRNAs; a novel cell-penetrating peptide (CPP), T9(dR), obtained from transportan (TP), was used for in vivo and in vitro testing.

In this study, toxicity of T9(dR) and TP and efficient delivery of siRNA were tested in 293T, MDCK, RAW, and A549 cells. Furthermore, T9(dR)- and TP-delivered siRNAs against nucleoprotein (NP) gene segment of influenza virus (siNP) were studied in both cell lines and mice.

Gel retardation showed that T9(dR) effectively condensed siRNA into nanoparticles sized between 350 and 550 nm when the mole ratio of T9(dR) to siRNA was ≥4:1. In vitro studies demonstrated that T9(dR) successfully delivered siRNA with low cellular toxicity into several cell lines. It was also observed that T9(dR)-delivered siRNAs inhibited replication of influenza virus more efficiently as compared to that delivered by TP into the MDCK and A549 cells. It was also noticed that when given a combined tail vein injection of siNP and T9(dR) or TP, all mice in the 50 nmol siNP group infected with PR8 influenza virus survived and showed weight recovery at 2 weeks post-infection.

This study indicates that T9(dR) is a promising siRNA delivery tool with potential application for nucleotide drug delivery.

Qing Ge,  Michael T. McManus,  Tam Nguyen … (2003)
Influenza A virus causes widespread infection in the human respiratory tract, but existing vaccines and drug therapy are of limited value. Here we show that short interfering RNAs (siRNAs) specific for conserved regions of the viral genome can potently inhibit influenza virus production in both cell lines and embryonated chicken eggs. The inhibition depends on the presence of a functional antisense strand in the siRNA duplex, suggesting that viral mRNA is the target of RNA interference. However, siRNA specific for nucleocapsid (NP) or a component of the RNA transcriptase (PA) abolished the accumulation of not only the corresponding mRNA but also virion RNA and its complementary RNA. These siRNAs also broadly inhibited the accumulation of other viral, but not cellular, RNAs. The findings reveal that newly synthesized NP and PA proteins are required for influenza virus transcription and replication and provide a basis for the development of siRNAs as prophylaxis and therapy for influenza infection in humans.

Marie Morille,  Catherine Passirani,  Arnaud Vonarbourg … (2015)
Initially, gene therapy was viewed as an approach for treating hereditary diseases, but its potential role in the treatment of acquired diseases such as cancer is now widely recognized. The understanding of the molecular mechanisms involved in cancer and the development of nucleic acid delivery systems are two concepts that have led to this development. Systemic gene delivery systems are needed for therapeutic application to cells inaccessible by percutaneous injection and for multi-located tumor sites, i.e. metastases. Non-viral vectors based on the use of cationic lipids or polymers appear to have promising potential, given the problems of safety encountered with viral vectors. Using these non-viral vectors, the current challenge is to obtain a similarly effective transfection to viral ones. Based on the advantages and disadvantages of existing vectors and on the hurdles encountered with these carriers, the aim of this review is to describe the "perfect vector" for systemic gene therapy against cancer.

Qing Ge,  Tam Nguyen,  Ailin Bai … (2004)
Influenza A virus infection is a major source of morbidity and mortality worldwide. Because the effectiveness of existing vaccines and antiviral drugs is limited, development of new treatment modalities is needed. Here, we show that short interfering RNAs (siRNAs) specific for conserved regions of influenza virus genes can prevent and treat influenza virus infection in mice. Virus production in lungs of infected mice is reduced by siRNAs given either before or after initiating virus infection, by using slow i.v. administration of small volumes containing siRNAs in complexes with a polycation carrier. Similar effects also are observed when mice are given DNA vectors i.v. or intranasally, from which siRNA precursors can be transcribed. Development of delivery systems that may be compatible with human use demonstrates the potential utility of siRNAs for prophylaxis and therapy of influenza virus infections in humans.