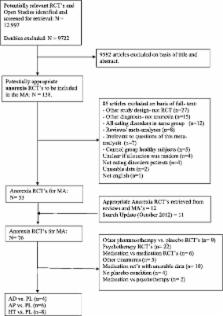 Anorexia Nervosa (AN) has a devastating impact on the psychological and physical well being of affected individuals. There is an extensive body of literature on interventions in AN, however more studies are needed to establish which form of pharmacotherapy is effective. The few meta-analyses that have been done are based on one type of medication only. This article is the first to present data on three different, most commonly used, forms of pharmacotherapy. The primary objective of this meta-analysis was to create an overview and to determine the efficacy of three forms of pharmacotherapy (antidepressants, antipsychotics, hormonal therapy) compared to treatment with placebo in patients with AN.

A systematic literature search was performed to identify all randomized controlled intervention trials investigating the effectiveness of pharmacotherapy for AN within the following databases: PubMed, PsycINFO, Embase and Cochrane Library. In addition, 32 relevant reviews and meta-analyses were screened for additional intervention studies. A meta-analysis was performed on a total of 18 included studies (N = 869). Efficacy was measured in terms of weight gain or weight restoration.

The pooled effect sizes indicating the difference between antidepressants and placebo, and between antipsychotics and placebo on weight were not significant. Because of the small sample size no meta regression and subgroup analyses could be conducted. The pooled effect size indicating the difference between hormonal therapy and the placebo condition on weight (all weight measures) at post-treatment was 0.42 (95% CI: 0.11 ~ 0.73), which was significant. For hormonal therapy heterogeneity was high (I 2 = 64.70). No evidence for publication bias was found. Meta-regression analyses of the weeks of medication treatment (slope = −0.008) yielded a significant effect (p = 0.04).

Trim and fill: A simple funnel-plot-based method of testing and adjusting for publication bias in meta-analysis.

R L Tweedie,  S Duval (2000)
We study recently developed nonparametric methods for estimating the number of missing studies that might exist in a meta-analysis and the effect that these studies might have had on its outcome. These are simple rank-based data augmentation techniques, which formalize the use of funnel plots. We show that they provide effective and relatively powerful tests for evaluating the existence of such publication bias. After adjusting for missing studies, we find that the point estimate of the overall effect size is approximately correct and coverage of the effect size confidence intervals is substantially improved, in many cases recovering the nominal confidence levels entirely. We illustrate the trim and fill method on existing meta-analyses of studies in clinical trials and psychometrics.

The prevalence and correlates of eating disorders in the National Comorbidity Survey Replication.

Eva Hiripi,  Welkin Pope,  R Kessler … (2007)
Little population-based data exist on the prevalence or correlates of eating disorders. Prevalence and correlates of eating disorders from the National Comorbidity Replication, a nationally representative face-to-face household survey (n = 9282), conducted in 2001-2003, were assessed using the WHO Composite International Diagnostic Interview. Lifetime prevalence estimates of DSM-IV anorexia nervosa, bulimia nervosa, and binge eating disorder are .9%, 1.5%, and 3.5% among women, and .3% .5%, and 2.0% among men. Survival analysis based on retrospective age-of-onset reports suggests that risk of bulimia nervosa and binge eating disorder increased with successive birth cohorts. All 3 disorders are significantly comorbid with many other DSM-IV disorders. Lifetime anorexia nervosa is significantly associated with low current weight (body-mass index or =40). Although most respondents with 12-month bulimia nervosa and binge eating disorder report some role impairment (data unavailable for anorexia nervosa since no respondents met criteria for 12-month prevalence), only a minority of cases ever sought treatment. Eating disorders, although relatively uncommon, represent a public health concern because they are frequently associated with other psychopathology and role impairment, and are frequently under-treated.

The efficacy of psychological, educational, and behavioral treatment. Confirmation from meta-analysis.

M W Lipsey,  D B Wilson (1993)
Conventional reviews of research on the efficacy of psychological, educational, and behavioral treatments often find considerable variation in outcome among studies and, as a consequence, fail to reach firm conclusions about the overall effectiveness of the interventions in question. In contrast meta-analytic reviews show a strong, dramatic pattern of positive overall effects that cannot readily be explained as artifacts of meta-analytic technique or generalized placebo effects. Moreover, the effects are not so small that they can be dismissed as lacking practical or clinical significance. Although meta-analysis has limitations, there are good reasons to believe that its results are more credible than those of conventional reviews and to conclude that well-developed psychological, educational, and behavioral treatment is generally efficacious.