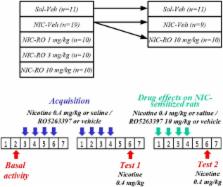 Trace amine-associated receptor 1 (TAAR1) has emerged as a promising target for addiction treatments because it affects dopamine transmission in the mesolimbic pathway. TAAR1 is involved in the effects of addictive drugs, such as amphetamines, cocaine and ethanol, but the impact of TAAR1 on the effects of nicotine, the psychoactive drug responsible for the development and maintenance of tobacco smoking, has not yet been studied. This study was performed to investigate the possible modulatory action of TAAR1 on the effects of nicotine on locomotor behaviors in rats and mice. Pretreatment with the TAAR1 agonist RO5263397 dose-dependently decreased nicotine-induced hyperlocomotion in rats habituated to locomotor boxes, prevented the development of nicotine sensitization and blocked hypermotility in nicotine-sensitized rats at the highest tested dose (10 mg/kg). The lack of TAAR1 failed to affect the effects of nicotine on the locomotion of mutant mice. Based on the results of the present study, TAAR1 activation attenuates the locomotion-stimulating effects of nicotine on rats. These results further support the previously proposed hypothesis that TAAR1 is a promising target for the prevention and treatment of drug addiction. Further studies aimed at analyzing the effects of TAAR1 agonists on animal models of nicotine addiction are warranted.

Alterations in dopaminergic and glutamatergic transmission in the induction and expression of behavioral sensitization: a critical review of preclinical studies.

Peter Kalivas,  Louk J. M. J. Vanderschuren,  L Vanderschuren … (2000)
Repeated exposure to many drugs of abuse results in a progressive and enduring enhancement in the motor stimulant effect elicited by a subsequent drug challenge. This phenomenon, termed behavioral sensitization, is thought to underlie certain aspects of drug addiction. Behavioral sensitization is the consequence of drug-induced neuroadaptive changes in a circuit involving dopaminergic and glutamatergic interconnections between the ventral tegmental area, nucleus accumbens, prefrontal cortex and amygdala. The literature was critically reviewed in an effort to discern the relative roles of glutamate and dopamine transmission in the induction and expression of sensitization to amphetamine, cocaine and mu-opioids. In addition, the literature was reviewed to evaluate distinctions between these drugs in the involvement of the relevant brain nuclei listed above. The common substrates between sensitizing drugs are glutamate transmission, especially at the NMDA receptor, and an action in the ventral tegmental area. In contrast, a role for dopamine is only clearly seen in amphetamine sensitization and critical involvement of nuclei outside the ventral tegmental area is found for cocaine and morphine. While enhanced dopamine transmission is associated with sensitization by all three drugs, a role for glutamate is clearly identified only with cocaine sensitization. Accordingly, glutamatergic cortical and allocortical brain regions such as the prefrontal cortex appear more critical for cocaine sensitization. The distinctions between drugs in the induction and expression of sensitization indicate that behavioral sensitization can arise from multiple neuroadaptations in multiple brain nuclei. This is not only the result of distinct molecular targets for the drugs, but may also include a differential involvement of learned associations. It is postulated that the relatively more robust pharmacological capacity of amphetamine to release dopamine may induce a form of sensitization that is more dependent on adaptations in mesoaccumbens dopamine transmission compared with cocaine and morphine sensitization.

This article was submitted to Neuropharmacology, a section of the journal Frontiers in Pharmacology