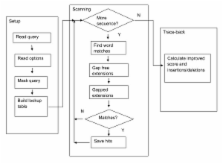 Sequence similarity searching is a very important bioinformatics task. While Basic Local Alignment Search Tool (BLAST) outperforms exact methods through its use of heuristics, the speed of the current BLAST software is suboptimal for very long queries or database sequences. There are also some shortcomings in the user-interface of the current command-line applications.

We describe features and improvements of rewritten BLAST software and introduce new command-line applications. Long query sequences are broken into chunks for processing, in some cases leading to dramatically shorter run times. For long database sequences, it is possible to retrieve only the relevant parts of the sequence, reducing CPU time and memory usage for searches of short queries against databases of contigs or chromosomes. The program can now retrieve masking information for database sequences from the BLAST databases. A new modular software library can now access subject sequence data from arbitrary data sources. We introduce several new features, including strategy files that allow a user to save and reuse their favorite set of options. The strategy files can be uploaded to and downloaded from the NCBI BLAST web site.

Richa Agarwala,  E. Gertz,  Aleksandr Morgulis … (2006)
Matches to repetitive sequences are usually undesirable in the output of DNA database searches. Repetitive sequences need not be matched to a query, if they can be masked in the database. RepeatMasker/Maskeraid (RM), currently the most widely used software for DNA sequence masking, is slow and requires a library of repetitive template sequences, such as a manually curated RepBase library, that may not exist for newly sequenced genomes. We have developed a software tool called WindowMasker (WM) that identifies and masks highly repetitive DNA sequences in a genome, using only the sequence of the genome itself. WM is orders of magnitude faster than RM because WM uses a few linear-time scans of the genome sequence, rather than local alignment methods that compare each library sequence with each piece of the genome. We validate WM by comparing BLAST outputs from large sets of queries applied to two versions of the same genome, one masked by WM, and the other masked by RM. Even for genomes such as the human genome, where a good RepBase library is available, searching the database as masked with WM yields more matches that are apparently non-repetitive and fewer matches to repetitive sequences. We show that these results hold for transcribed regions as well. WM also performs well on genomes for which much of the sequence was in draft form at the time of the analysis. WM is included in the NCBI C++ toolkit. The source code for the entire toolkit is available at ftp://ftp.ncbi.nih.gov/toolbox/ncbi_tools++/CURRENT/. Once the toolkit source is unpacked, the instructions for building WindowMasker application in the UNIX environment can be found in file src/app/winmasker/README.build. Supplementary data are available at ftp://ftp.ncbi.nlm.nih.gov/pub/agarwala/windowmasker/windowmasker_suppl.pdf

E Koonin,  Richard Miller,  David Madden … (1998)
Protein families often are characterized by conserved sequence patterns or motifs. A researcher frequently wishes to evaluate the significance of a specific pattern within a protein, or to exploit knowledge of known motifs to aid the recognition of greatly diverged but homologous family members. To assist in these efforts, the pattern-hit initiated BLAST (PHI-BLAST) program described here takes as input both a protein sequence and a pattern of interest that it contains. PHI-BLAST searches a protein database for other instances of the input pattern, and uses those found as seeds for the construction of local alignments to the query sequence. The random distribution of PHI-BLAST alignment scores is studied analytically and empirically. In many instances, the program is able to detect statistically significant similarity between homologous proteins that are not recognizably related using traditional single-pass database search methods. PHI-BLAST is applied to the analysis of CED4-like cell death regulators, HS90-type ATPase domains, archaeal tRNA nucleotidyltransferases and archaeal homologs of DnaG-type DNA primases.

IMPALA: matching a protein sequence against a collection of PSI-BLAST-constructed position-specific score matrices.

C Ponting,  Maxim Wolf,  L Aravind … (1999)
Many studies have shown that database searches using position-specific score matrices (PSSMs) or profiles as queries are more effective at identifying distant protein relationships than are searches that use simple sequences as queries. One popular program for constructing a PSSM and comparing it with a database of sequences is Position-Specific Iterated BLAST (PSI-BLAST). This paper describes a new software package, IMPALA, designed for the complementary procedure of comparing a single query sequence with a database of PSI-BLAST-generated PSSMs. We illustrate the use of IMPALA to search a database of PSSMs for protein folds, and one for protein domains involved in signal transduction. IMPALA's sensitivity to distant biological relationships is very similar to that of PSI-BLAST. However, IMPALA employs a more refined analysis of statistical significance and, unlike PSI-BLAST, guarantees the output of the optimal local alignment by using the rigorous Smith-Waterman algorithm. Also, it is considerably faster when run with a large database of PSSMs than is BLAST or PSI-BLAST when run against the complete non-redundant protein database.