Perceived stigmatization and discrimination of people with mental illness: A survey-based study of the general population in five metropolitan cities in India 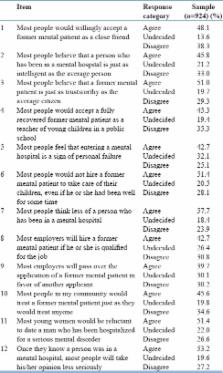 India faces a significant gap between the prevalence of mental illness among the population and the availability and effectiveness of mental health care in providing adequate treatment. This discrepancy results in structural stigma toward mental illness which in turn is one of the main reasons for a persistence of the treatment gap, whereas societal factors such as religion, education, and family structures play critical roles. This survey-based study investigates perceived stigma toward mental illness in five metropolitan cities in India and explores the roles of relevant sociodemographic factors.

G. Thornicroft,  Peter Evans,  R Mojtabai … (2012)
Little is known about how the views of the public are related to self-stigma among people with mental health problems. Despite increasing activity aimed at reducing mental illness stigma, there is little evidence to guide and inform specific anti-stigma campaign development and messages to be used in mass campaigns. A better understanding of the association between public knowledge, attitudes and behaviours and the internalization of stigma among people with mental health problems is needed. This study links two large, international datasets to explore the association between public stigma in 14 European countries (Eurobarometer survey) and individual reports of self-stigma, perceived discrimination and empowerment among persons with mental illness (n=1835) residing in those countries [the Global Alliance of Mental Illness Advocacy Networks (GAMIAN) study]. Individuals with mental illness living in countries with less stigmatizing attitudes, higher rates of help-seeking and treatment utilization and better perceived access to information had lower rates of self-stigma and perceived discrimination and those living in countries where the public felt more comfortable talking to people with mental illness had less self-stigma and felt more empowered. Targeting the general public through mass anti-stigma interventions may lead to a virtuous cycle by disrupting the negative feedback engendered by public stigma, thereby reducing self-stigma among people with mental health problems. A combined approach involving knowledge, attitudes and behaviour is needed; mass interventions that facilitate disclosure and positive social contact may be the most effective. Improving availability of information about mental health issues and facilitating access to care and help-seeking also show promise with regard to stigma.