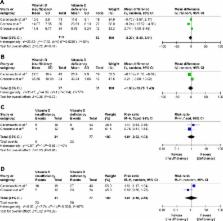 This study aimed to investigate the association between vitamin D and systemic sclerosis (SSc) by meta-analysis.

A comprehensive search was performed through June 12, 2017. Pooled standardized mean difference (SMD) was used to estimate the mean vitamin D difference between case and control groups (or between diffused- and limited-type SSc). Pooled risk ratios (RRs) with 95% confidence intervals (CIs) were used to assess the impact of vitamin D level on clinical characteristics of SSc patients. All statistical analyses were performed using Revman 5.0 software.

Y Arnson,  Howard Amital,  Yehuda Shoenfeld (2007)
Vitamin D is frequently prescribed by rheumatologists to prevent and treat osteoporosis. Several observations have shown that vitamin D inhibits proinflammatory processes by suppressing the enhanced activity of immune cells that take part in the autoimmune reaction. Moreover, recent evidence strongly suggests that vitamin D supplementation may be therapeutically beneficial, particularly for Th1-mediated autoimmune disorders. Some reports imply that vitamin D may even be preventive in certain disorders such as multiple sclerosis and diabetes type 1. It seems that vitamin D has crossed the boundaries of calcium metabolism and has become a significant factor in a number of physiological functions, specifically as a biological inhibitor of inflammatory hyperactivity.

Vitamin D, a neuro-immunomodulator: implications for neurodegenerative and autoimmune diseases.

D.A. Fernandes de Abreu,  D. Eyles,  F. Féron … (2009)
It has been known for more than 20 years that vitamin D exerts marked effects on immune and neural cells. These non-classical actions of vitamin D have recently gained a renewed attention since it has been shown that diminished levels of vitamin D induce immune-mediated symptoms in animal models of autoimmune diseases and is a risk factor for various brain diseases. For example, it has been demonstrated that vitamin D (i) modulates the production of several neurotrophins, (ii) up-regulates Interleukin-4 and (iii) inhibits the differentiation and survival of dendritic cells, resulting in impaired allo-reactive T cell activation. Not surprisingly, vitamin D has been found to be a strong candidate risk-modifying factor for Multiple Sclerosis (MS), the most prevalent neurological and inflammatory disease in the young adult population. Vitamin D is a seco-steroid hormone, produced photochemically in the animal epidermis. The action of ultraviolet light (UVB) on 7-dehydrocholesterol results in the production of pre-vitamin D which, after thermo-conversion and two separate hydroxylations, gives rise to the active 1,25-dihydroxyvitamin D. Vitamin D acts through two types of receptors: (i) the vitamin D receptor (VDR), a member of the steroid/thyroid hormone superfamily of transcription factors, and (ii) the MARRS (membrane associated, rapid response steroid binding) receptor, also known as Erp57/Grp58. In this article, we review some of the mechanisms that may underlie the role of vitamin D in various brain diseases. We then assess how vitamin D imbalance may lay the foundation for a range of adult disorders, including brain pathologies (Parkinson's disease, epilepsy, depression) and immune-mediated disorders (rheumatoid arthritis, type I diabetes mellitus, systemic lupus erythematosus or inflammatory bowel diseases). Multidisciplinary scientific collaborations are now required to fully appreciate the complex role of vitamin D in mammal metabolism.

Wendy Dankers,  Edgar M. Colin,  Jan van Hamburg … (2017)
Over the last three decades, it has become clear that the role of vitamin D goes beyond the regulation of calcium homeostasis and bone health. An important extraskeletal effect of vitamin D is the modulation of the immune system. In the context of autoimmune diseases, this is illustrated by correlations of vitamin D status and genetic polymorphisms in the vitamin D receptor with the incidence and severity of the disease. These correlations warrant investigation into the potential use of vitamin D in the treatment of patients with autoimmune diseases. In recent years, several clinical trials have been performed to investigate the therapeutic value of vitamin D in multiple sclerosis, rheumatoid arthritis, Crohn’s disease, type I diabetes, and systemic lupus erythematosus. Additionally, a second angle of investigation has focused on unraveling the molecular pathways used by vitamin D in order to find new potential therapeutic targets. This review will not only provide an overview of the clinical trials that have been performed but also discuss the current knowledge about the molecular mechanisms underlying the immunomodulatory effects of vitamin D and how these advances can be used in the treatment of autoimmune diseases.