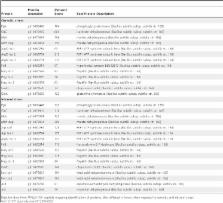 One of the strategies for survival stress conditions in bacteria is a regulatory adaptive system called general stress response (GSR), which is dependent on the SigB transcription factor in Bacillus sp. The GSR is one of the largest regulon in Bacillus sp., including about 100 genes; however, most of the genes that show changes in expression during various stresses have not yet been characterized or assigned a biochemical function for the encoded proteins. Previously, we characterized the Bacillus subtilis168 osmosensitive mutant, defective in the yxkO gene (encoding a putative ribokinase), which was recently assigned in vitro as an ADP/ATP-dependent NAD(P)H-hydrate dehydratase and was demonstrated to belong to the SigB operon.

We show the impact of YxkO on the activity of SigB-dependent P ctc promoter and adaptation to osmotic and ethanol stress and potassium limitation respectively. Using a 2DE approach, we compare the proteomes of WT and mutant strains grown under conditions of osmotic and ethanol stress. Both stresses led to changes in the protein level of enzymes that are involved in motility (flagellin), citrate cycle (isocitrate dehydrogenase, malate dehydrogenase), glycolysis (phosphoglycerate kinase), and decomposition of Amadori products (fructosamine-6-phosphate deglycase). Glutamine synthetase revealed a different pattern after osmotic stress. The patterns of enzymes for branched amino acid metabolism and cell wall synthesis (L-alanine dehydrogenase, aspartate-semialdehyde dehydrogenase, ketol-acid reductoisomerase) were altered after ethanol stress.

We performed the first characterization of a Bacillus subtilis168 knock-out mutant in the yxkO gene that encodes a metabolite repair enzyme. We show that such enzymes could play a significant role in the survival of stressed cells.

Jan Pané-Farré,  Uwe Völker,  Michael Hecker (2006)
One of the strongest and most noticeable responses of Bacillus subtilis cells to a range of stress and starvation stimuli is the dramatic induction of about 150 SigB-dependent general stress genes. The activity of SigB itself is tightly regulated by a complex signal transduction cascade with at least three main signaling pathways that respond to environmental stress, energy depletion, or low temperature. The SigB-dependent response is conserved in related gram-positive bacteria but is missing in strictly anaerobic or in some facultatively anaerobic gram-positive bacteria. It covers functions from nonspecific and multiple stress resistance to the control of virulence in pathogenic bacteria. A comprehensive understanding of this crucial stress response is essential not only for bacterial physiology but also for applied microbiology, including pathogenicity and pathogen control.

W Ye,  Thorsten Mascher,  Neil G Margulis … (2003)
In response to sublethal concentrations of antibiotics, bacteria often induce an adaptive response that can contribute to antibiotic resistance. We report the response of Bacillus subtilis to bacitracin, an inhibitor of cell wall biosynthesis found in its natural environment. Analysis of the global transcriptional profile of bacitracin-treated cells reveals a response orchestrated by two alternative sigma factors (sigmaB and sigmaM) and three two-component systems (YvqEC, YvcPQ and BceRS). All three two-component systems are located next to target genes that are strongly induced by bacitracin, and the corresponding histidine kinases share an unusual topology: they lack about 100 amino acids in their extracellular sensing domain, which is almost entirely buried in the cytoplasmic membrane. Sequence analysis indicates that this novel N-terminal sensing domain is a characteristic feature of a subfamily of histidine kinases, found almost entirely in Gram-positive bacteria and frequently linked to ABC transporters. A systematic mutational analysis of bacitracin-induced genes led to the identification of a new bacitracin-resistance determinant, bceAB, encoding a putative ABC transporter. The bcrC bacitracin resistance gene, which is under the dual control of sigmaX and sigmaM, was also induced by bacitracin. By comparing the bacitracin and the vancomycin stimulons, we can differentiate between loci induced specifically by bacitracin and those that are induced by multiple cell wall-active antibiotics.

Global analysis of the general stress response of Bacillus subtilis.

M Brigulla,  Tammy Haas,  J Hoheisel … (2001)
Gene arrays containing all currently known open reading frames of Bacillus subtilis were used to examine the general stress response of Bacillus. By proteomics, transcriptional analysis, transposon mutagenesis, and consensus promoter-based screening, 75 genes had previously been described as sigma(B)-dependent general stress genes. The present gene array-based analysis confirmed 62 of these already known general stress genes and detected 63 additional genes subject to control by the stress sigma factor sigma(B). At least 24 of these 125 sigma(B)-dependent genes seemed to be subject to a second, sigma(B)-independent stress induction mechanism. Therefore, this transcriptional profiling revealed almost four times as many regulon members as the proteomic approach, but failure of confirmation of all known members of the sigma(B) regulon indicates that even this approach has not yet elucidated the entire regulon. Most of the sigma(B)-dependent general stress proteins are probably located in the cytoplasm, but 25 contain at least one membrane-spanning domain, and at least 6 proteins appear to be secreted. The functions of most of the newly described genes are still unknown. However, their classification as sigma(B)-dependent stress genes argues that their products most likely perform functions in stress management and help to provide the nongrowing cell with multiple stress resistance. A comprehensive screening program analyzing the multiple stress resistance of mutants with mutations in single stress genes is in progress. The first results of this program, showing the diminished salt resistance of yjbC and yjbD mutants compared to that of the wild type, are presented. Only a few new sigma(B)-dependent proteins with already known functions were found, among them SodA, encoding a superoxide dismutase. In addition to analysis of the sigma(B)-dependent general stress regulon, a comprehensive list of genes induced by heat, salt, or ethanol stress in a sigma(B)-independent manner is presented. Perhaps the most interesting of the sigma(B)-independent stress phenomena was the induction of the extracytoplasmic function sigma factor sigma(W) and its entire regulon by salt shock.

The study was supported by projects of Ministry of Education, Youth and Sports of the Czech Republic (LC06066) and by the Charles University by project of Specific University Research (SVV-2014-260081). The funders had no role in study design, data collection and analysis, decision to publish, or preparation of the manuscript.