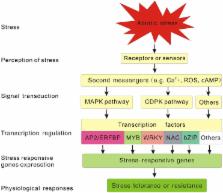 Agricultural production and quality are adversely affected by various abiotic stresses worldwide and this will be exacerbated by the deterioration of global climate. To feed a growing world population, it is very urgent to breed stress-tolerant crops with higher yields and improved qualities against multiple environmental stresses. Since conventional breeding approaches had marginal success due to the complexity of stress tolerance traits, the transgenic approach is now being popularly used to breed stress-tolerant crops. So identifying and characterizing the critical genes involved in plant stress responses is an essential prerequisite for engineering stress-tolerant crops. Far beyond the manipulation of single functional gene, engineering certain regulatory genes has emerged as an effective strategy now for controlling the expression of many stress-responsive genes. Transcription factors (TFs) are good candidates for genetic engineering to breed stress-tolerant crop because of their role as master regulators of many stress-responsive genes. Many TFs belonging to families AP2/EREBP, MYB, WRKY, NAC, bZIP have been found to be involved in various abiotic stresses and some TF genes have also been engineered to improve stress tolerance in model and crop plants. In this review, we take five large families of TFs as examples and review the recent progress of TFs involved in plant abiotic stress responses and their potential utilization to improve multiple stress tolerance of crops in the field conditions.

Qiang Liu,  Mie Kasuga,  Yoh Sakuma … (1998)
Plant growth is greatly affected by drought and low temperature. Expression of a number of genes is induced by both drought and low temperature, although these stresses are quite different. Previous experiments have established that a cis-acting element named DRE (for dehydration-responsive element) plays an important role in both dehydration- and low-temperature-induced gene expression in Arabidopsis. Two cDNA clones that encode DRE binding proteins, DREB1A and DREB2A, were isolated by using the yeast one-hybrid screening technique. The two cDNA libraries were prepared from dehydrated and cold-treated rosette plants, respectively. The deduced amino acid sequences of DREB1A and DREB2A showed no significant sequence similarity, except in the conserved DNA binding domains found in the EREBP and APETALA2 proteins that function in ethylene-responsive expression and floral morphogenesis, respectively. Both the DREB1A and DREB2A proteins specifically bound to the DRE sequence in vitro and activated the transcription of the b-glucuronidase reporter gene driven by the DRE sequence in Arabidopsis leaf protoplasts. Expression of the DREB1A gene and its two homologs was induced by low-temperature stress, whereas expression of the DREB2A gene and its single homolog was induced by dehydration. Overexpression of the DREB1A cDNA in transgenic Arabidopsis plants not only induced strong expression of the target genes under unstressed conditions but also caused dwarfed phenotypes in the transgenic plants. These transgenic plants also revealed freezing and dehydration tolerance. In contrast, overexpression of the DREB2A cDNA induced weak expression of the target genes under unstressed conditions and caused growth retardation of the transgenic plants. These results indicate that two independent families of DREB proteins, DREB1 and DREB2, function as trans-acting factors in two separate signal transduction pathways under low-temperature and dehydration conditions, respectively.

Genome-wide analysis of the ERF gene family in Arabidopsis and rice.

Tatsuhito Fujimura,  Hideaki Shinshi,  Toshitsugu Nakano … (2006)
Genes in the ERF family encode transcriptional regulators with a variety of functions involved in the developmental and physiological processes in plants. In this study, a comprehensive computational analysis identified 122 and 139 ERF family genes in Arabidopsis (Arabidopsis thaliana) and rice (Oryza sativa L. subsp. japonica), respectively. A complete overview of this gene family in Arabidopsis is presented, including the gene structures, phylogeny, chromosome locations, and conserved motifs. In addition, a comparative analysis between these genes in Arabidopsis and rice was performed. As a result of these analyses, the ERF families in Arabidopsis and rice were divided into 12 and 15 groups, respectively, and several of these groups were further divided into subgroups. Based on the observation that 11 of these groups were present in both Arabidopsis and rice, it was concluded that the major functional diversification within the ERF family predated the monocot/dicot divergence. In contrast, some groups/subgroups are species specific. We discuss the relationship between the structure and function of the ERF family proteins based on these results and published information. It was further concluded that the expansion of the ERF family in plants might have been due to chromosomal/segmental duplication and tandem duplication, as well as more ancient transposition and homing. These results will be useful for future functional analyses of the ERF family genes.

Kazuko Yamaguchi-Shinozaki,  Mie Kasuga,  Y Sakuma … (2003)
The transcription factors DREBs/CBFs specifically interact with the dehydration-responsive element/C-repeat (DRE/CRT) cis-acting element (core motif: G/ACCGAC) and control the expression of many stress-inducible genes in Arabidopsis. In rice, we isolated five cDNAs for DREB homologs: OsDREB1A, OsDREB1B, OsDREB1C, OsDREB1D, and OsDREB2A. Expression of OsDREB1A and OsDREB1B was induced by cold, whereas expression of OsDREB2A was induced by dehydration and high-salt stresses. The OsDREB1A and OsDREB2A proteins specifically bound to DRE and activated the transcription of the GUS reporter gene driven by DRE in rice protoplasts. Over-expression of OsDREB1A in transgenic Arabidopsis induced over-expression of target stress-inducible genes of Arabidopsis DREB1A resulting in plants with higher tolerance to drought, high-salt, and freezing stresses. This indicated that OsDREB1A has functional similarity to DREB1A. However, in microarray and RNA blot analyses, some stress-inducible target genes of the DREB1A proteins that have only ACCGAC as DRE were not over-expressed in the OsDREB1A transgenic Arabidopsis. The OsDREB1A protein bound to GCCGAC more preferentially than to ACCGAC whereas the DREB1A proteins bound to both GCCGAC and ACCGAC efficiently. The structures of DREB1-type ERF/AP2 domains in monocots are closely related to each other as compared with that in the dicots. OsDREB1A is potentially useful for producing transgenic monocots that are tolerant to drought, high-salt, and/or cold stresses.