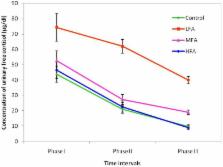 To determine the circadian rhythm alteration of cortisol excretion and the level of corticosteroids in children with different grades of autism severity.

These data suggest that altered cortisol excretion pattern and high level of corticosteroids in urine may probably be a consequence of altered hypothalamic-pituitary-adrenal axis function, which may contribute to the pathogenesis and affect the severity of autism.

The genetics of mammalian circadian order and disorder: implications for physiology and disease.

Jeff C H Ko,  Erin McDearmon,  Suk-Kyung Hong … (2008)
Circadian cycles affect a variety of physiological processes, and disruptions of normal circadian biology therefore have the potential to influence a range of disease-related pathways. The genetic basis of circadian rhythms is well studied in model organisms and, more recently, studies of the genetic basis of circadian disorders has confirmed the conservation of key players in circadian biology from invertebrates to humans. In addition, important advances have been made in understanding how these molecules influence physiological functions in tissues throughout the body. Together, these studies set the scene for applying our knowledge of circadian biology to the understanding and treatment of a range of human diseases, including cancer and metabolic and behavioural disorders.

Genetics of autism: complex aetiology for a heterogeneous disorder.

S Folstein,  Susan Folstein,  Lindsey B. Rosen (2001)
Since autism was first recognized as a disorder in 1943, speculation about its aetiology has ranged from biological to psychological and back again. After twin studies during the 1970s and 1980s yielded unequivocal evidence for a genetic component, aetiological research in autism began to focus primarily on uncovering the genetic mechanisms involved. The identification of chromosomal abnormalities and Mendelian syndromes among individuals with autism, in conjunction with data from genome screens and candidate-gene studies, has helped to refine the view of the complex genetics that underlies autism spectrum conditions.

This is an open access article distributed under the Creative Commons Attribution License, which permits unrestricted non-commercial use, distribution, and reproduction in any medium, provided the original work is properly cited.