Development and Validation of an RP-HPLC-PDA Method for Determination of Paracetamol, Caffeine and Tramadol Hydrochloride in Pharmaceutical Formulations 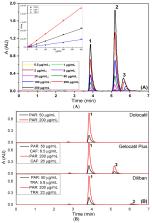 Paracetamol (acetaminophen) (PAR), caffeine (CAF) and tramadol hydrochloride (TRA) are important drugs widely used for many clinical purposes. Determination of their contents is of the paramount interest. In this respect, a quick, simple and sensitive isocratic RP-HPLC method with photodiode array detection was developed for the determination of paracetamol, caffeine and tramadol in pharmaceutical formulations. An improved sensitive procedure was also evolved for tramadol using a fluorescence detector system. A C 18 column and a mobile phase constituted by methanol/phosphate were used. LODs were found to be 0.2 μg/mL, 0.1 μg/mL and 0.3 μg/mL for paracetamol, caffeine and tramadol hydrochloride, respectively, using photodiode-array detection. Alternatively, LOD for tramadol decreased to 0.1 μg/mL with the fluorescence detector. Other notable analytical figures of merit include the linear concentration ranges, 0.8–270 μg/mL, 0.4–250 μg/mL and 1.0–300 (0.2–40) μg/mL, for the same ordered analytes (including the fluorescence detector). The proposed method was successfully applied for the quantitative determination of the three drugs in tablet dosage forms.

Garry Graham,  Alan F. Scott,  Richard O Day … (2013)
Paracetamol is used worldwide for its analgesic and antipyretic actions. It has a spectrum of action similar to that of NSAIDs and resembles particularly the COX-2 selective inhibitors. Paracetamol is, on average, a weaker analgesic than NSAIDs or COX-2 selective inhibitors but is often preferred because of its better tolerance. Despite the similarities to NSAIDs, the mode of action of paracetamol has been uncertain, but it is now generally accepted that it inhibits COX-1 and COX-2 through metabolism by the peroxidase function of these isoenzymes. This results in inhibition of phenoxyl radical formation from a critical tyrosine residue essential for the cyclooxygenase activity of COX-1 and COX-2 and prostaglandin (PG) synthesis. Paracetamol shows selectivity for inhibition of the synthesis of PGs and related factors when low levels of arachidonic acid and peroxides are available but conversely, it has little activity at substantial levels of arachidonic acid and peroxides. The result is that paracetamol does not suppress the severe inflammation of rheumatoid arthritis and acute gout but does inhibit the lesser inflammation resulting from extraction of teeth and is also active in a variety of inflammatory tests in experimental animals. Paracetamol often appears to have COX-2 selectivity. The apparent COX-2 selectivity of action of paracetamol is shown by its poor anti-platelet activity and good gastrointestinal tolerance. Unlike both non-selective NSAIDs and selective COX-2 inhibitors, paracetamol inhibits other peroxidase enzymes including myeloperoxidase. Inhibition of myeloperoxidase involves paracetamol oxidation and concomitant decreased formation of halogenating oxidants (e.g. hypochlorous acid, hypobromous acid) that may be associated with multiple inflammatory pathologies including atherosclerosis and rheumatic diseases. Paracetamol may, therefore, slow the development of these diseases. Paracetamol, NSAIDs and selective COX-2 inhibitors all have central and peripheral effects. As is the case with the NSAIDs, including the selective COX-2 inhibitors, the analgesic effects of paracetamol are reduced by inhibitors of many endogenous neurotransmitter systems including serotonergic, opioid and cannabinoid systems. There is considerable debate about the hepatotoxicity of therapeutic doses of paracetamol. Much of the toxicity may result from overuse of combinations of paracetamol with opioids which are widely used, particularly in USA.

Marie Morelato,  Alison Beavis,  K Kirkbride … (2013)
Desorption electrospray ionisation mass spectrometry (DESI-MS) is an emerging analytical technique that enables in situ mass spectrometric analysis of specimens under ambient conditions. It has been successfully applied to a large range of forensically relevant materials. This review assesses and highlights forensic applications of DESI-MS including the analysis and detection of illicit drugs, explosives, chemical warfare agents, inks and documents, fingermarks, gunshot residues and drugs of abuse in urine and plasma specimens. The minimal specimen preparation required for analysis and the sensitivity of detection achieved offer great advantages, especially in the field of forensic science.