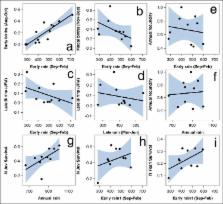 In high temperate latitudes, ungulates generally give birth within a narrow time window when conditions are optimal for offspring survival in spring or early summer, and use changing photoperiod to time conceptions so as to anticipate these conditions. However, in low tropical latitudes day length variation is minimal, and rainfall variation makes the seasonal cycle less predictable. Nevertheless, several ungulate species retain narrow birth peaks under such conditions, while others show births spread quite widely through the year. We investigated how within-year and between-year variation in rainfall influenced the reproductive timing of four ungulate species showing these contrasting patterns in the Masai Mara region of Kenya. All four species exhibited birth peaks during the putative optimal period in the early wet season. For hartebeest and impala, the birth peak was diffuse and offspring were born throughout the year. In contrast, topi and warthog showed a narrow seasonal concentration of births, with conceptions suppressed once monthly rainfall fell below a threshold level. High rainfall in the previous season and high early rains in the current year enhanced survival into the juvenile stage for all the species except impala. Our findings reveal how rainfall variation affecting grass growth and hence herbivore nutrition can govern the reproductive phenology of ungulates in tropical latitudes where day length variation is minimal. The underlying mechanism seems to be the suppression of conceptions once nutritional gains become insufficient. Through responding proximally to within-year variation in rainfall, tropical savanna ungulates are less likely to be affected adversely by the consequences of global warming for vegetation phenology than northern ungulates showing more rigid photoperiodic control over reproductive timing.

Atmospheric warming and the amplification of precipitation extremes.

P Allan,  Brian J Soden (2008)
Climate models suggest that extreme precipitation events will become more common in an anthropogenically warmed climate. However, observational limitations have hindered a direct evaluation of model-projected changes in extreme precipitation. We used satellite observations and model simulations to examine the response of tropical precipitation events to naturally driven changes in surface temperature and atmospheric moisture content. These observations reveal a distinct link between rainfall extremes and temperature, with heavy rain events increasing during warm periods and decreasing during cold periods. Furthermore, the observed amplification of rainfall extremes is found to be larger than that predicted by models, implying that projections of future changes in rainfall extremes in response to anthropogenic global warming may be underestimated.

Rainfall influences on ungulate population abundance in the Mara-Serengeti ecosystem.

N Bhola,  Joseph O Ogutu,  H.-P. PIEPHO … (2008)
1. Rainfall is the prime climatic factor underpinning the dynamics of African savanna ungulates, but no study has analysed its influence on the abundance of these ungulates at monthly to multiannual time scales. 2. We report relationships between rainfall and changes in age- and sex-structured abundances of seven ungulate species monitored monthly for 15 years using vehicle ground counts in the Maasai Mara National Reserve, Kenya. 3. Abundance showed strong and curvilinear relationships with current and cumulative rainfall, with older topi, Damaliscus korrigum (Ogilby); warthog, Phacochoerus aethiopicus (Pallas); waterbuck, Kobus ellipsyprimnus (Ogilby); and impala, Aepyceros melampus (Lichtenstein) responding to longer lags than younger animals, portraying carryover effects of prior habitat conditions. 4. The abundances of newborn calves were best correlated with monthly rainfall averaged over the preceding 5-6 months for topi, waterbuck, warthog, and 2 months for the migratory zebra Equus burchelli (Gray), but with seasonal rainfall averaged over 2-5 years for giraffe, Giraffa camelopardalis (L.); impala; and kongoni, Alcelaphus busephalus (Pallas). The cumulative late wet-season rainfall was the best predictor of abundance for quarter- to full-grown animals for most species. Monthly rainfall exerted both negative and positive effects on the abundances of zebra, impala and waterbuck. Ignoring age, both sexes responded similarly to rainfall. 5. Births were strongly seasonal only for warthog and topi, but peaked between August and December for most species. Hence abundance was strongly seasonal for young topi and warthog and the migratory zebra. Pronounced seasonality in births for warthog and topi obliterated otherwise strong relationships between abundance and rainfall when both month and rainfall were included in the same model. Aggregated density produced relationships with rainfall similar to those for fully grown animals, emphasizing the necessity of demographic monitoring to reliably reveal rainfall influences on ungulate abundance in the Mara. 6. Strong relationships between abundance and rainfall suggest that rainfall underpins the dynamics of African savanna ungulates, and that changes in rainfall due to global warming may markedly alter the abundance and diversity of these mammals. Ungulates respond to rainfall fluctuations through movements, reproduction or survival, and the responses appear independent of breeding phenology and synchrony, dietary guild, or degree of water dependence. Newborns and adults have contrasting responses to rainfall. Males and females respond similarly to rainfall when age is ignored.

The monitoring was funded by the World Wide Fund for Nature-East Africa Program (WWF-EARPO) and Friends of Conservation (FOC). The program also received financial, material or logistical support from WWF-US, WWF-Sweden, the Darwin Initiative (DICE), the University of British Columbia, United States Fish and Wildlife Service, Kenya Wildlife Service, Cottar’s Camp, Kichwa Tembo, Keekorok Lodge/Balloon Safaris and Kerr and Downey Safaris. Data analysis and writing were partially supported by the National Science Foundation (NSF) through Grant Nos: BCS 0709671 and DEB-0342820 and a grant from the Belgian government (DGIC BEL011) to the International Livestock Research Institute. JO was supported by the International Livestock Research Institute (ILRI)​, the University of Hohenheim​, Biostatistics Unit and a grant from the German Research Found (DFG, Research Grant # OG 83/1-1)​. The funders had no role in study design, data collection and analysis, decision to publish, or preparation of the manuscript.