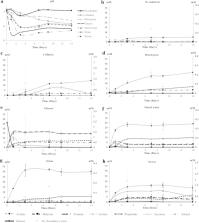 The guinea pig ( Cavia porcellus) or cavy is a grass-eating rodent. Its main diet consists of grass or hay, which comprises cellulose, hemicellulose, lignin and their derivatives. Here, the microbial diversity of faecal samples of two guinea pigs and microbial enrichments made with substrates, including starch waste and dried grass, were investigated along with organic acid production profiles. The microbial communities of the faecal samples were dominated by the phyla Bacteroidetes (40%) and Firmicutes (36%). Bacteroidales S24-7 (11% in Cavy 1 and 21% in Cavy 2) was the most abundant order. At genus level, many microorganisms remained unclassified. Different carbon sources were used for organic acid production in faecal enrichments. The dominant bacterial groups in the secondary enrichments with dried grass, starch waste and xylose were closely related to Prevotella and Blautia. Acetate was the predominant organic acid from all enrichments. The organic acid production profiles corresponded to a mixed acid fermentation but differed depending on the substrate. Eight phylogenetically different isolates were obtained, including a novel Streptococcus species, strain Cavy grass 6. This strain had a low abundance (1%) in one of the faecal samples but was enriched in the dried grass enrichment (3%). Cavy grass 6, a fast-growing heterolactic bacterium, ferments cellobiose to lactate, acetate, formate and ethanol. Our results show that cavy faecal samples can be applied as microbial source for organic acid production from complex organic substrates. The cavy gut contains many as-yet-uncultivated bacteria which may be appropriate targets for future studies.

Error-correcting barcoded primers for pyrosequencing hundreds of samples in multiplex.

Jessica Harris,  Rob Knight,  David Walker … (2008)
We constructed error-correcting DNA barcodes that allow one run of a massively parallel pyrosequencer to process up to 1,544 samples simultaneously. Using these barcodes we processed bacterial 16S rRNA gene sequences representing microbial communities in 286 environmental samples, corrected 92% of sample assignment errors, and thus characterized nearly as many 16S rRNA genes as have been sequenced to date by Sanger sequencing.

B Kuypers-Engelen,  I Amann-Zalan,  A Felske … (1996)
Sequence heterogeneities in 16S rRNA genes from individual strains of Paenibacillus polymyxa were detected by sequence-dependent separation of PCR products by temperature gradient gel electrophoresis (TGGE). A fragment of the 16S rRNA genes, comprising variable regions V6 to V8, was used as a target sequence for amplifications. PCR products from P. polymyxa (type strain) emerged as a well-defined pattern of bands in the gradient gel. Six plasmids with different inserts, individually demonstrating the migration characteristics of single bands of the pattern, were obtained by cloning the PCR products. Their sequences were analyzed as a representative sample of the total heterogeneity. An amount of 10 variant nucleotide positions in the fragment of 347 bp was observed, with all substitutions conserving the relevant secondary structures of the V6 and V8 regions in the RNA molecules. Hybridizations with specifically designed probes demonstrated different chromosomal locations of the respective rRNA genes. Amplifications of reverse-transcribed rRNA from ribosome preparations, as well as whole-cell hybridizations, revealed a predominant representation of particular sequences in ribosomes of exponentially growing laboratory cultures. Different strains of P. polymyxa showed not only remarkably differing patterns of PCR products in TGGE analysis but also discriminative whole-cell labeling with the designed oligonucleotide probes, indicating the different representation of individual sequences in active ribosomes. Our results demonstrate the usefulness of TGGE for the structural analysis of heterogeneous rRNA genes together with their expression, stress problems of the generation of meaningful data for 16S rRNA sequences and probe designs, and might have consequences for evolutionary concepts.

Lisa O Singh,  Sompal Singh,  Raj Kumar Rauniyar (2008)
In view of rising prices of crude oil due to increasing fuel demands, the need for alternative sources of bioenergy is expected to increase sharply in the coming years. Among potential alternative bioenergy resources, lignocellulosics have been identified as the prime source of biofuels and other value-added products. Lignocelluloses as agricultural, industrial and forest residuals account for the majority of the total biomass present in the world. To initiate the production of industrially important products from cellulosic biomass, bioconversion of the cellulosic components into fermentable sugars is necessary. A variety of microorganisms including bacteria and fungi may have the ability to degrade the cellulosic biomass to glucose monomers. Bacterial cellulases exist as discrete multi-enzyme complexes, called cellulosomes that consist of multiple subunits. Cellulolytic enzyme systems from the filamentous fungi, especially Trichoderma reesei, contain two exoglucanases or cellobiohydrolases (CBH1 and CBH2), at least four endoglucanases (EG1, EG2, EG3, EG5), and one beta-glucosidase. These enzymes act synergistically to catalyse the hydrolysis of cellulose. Different physical parameters such as pH, temperature, adsorption, chemical factors like nitrogen, phosphorus, presence of phenolic compounds and other inhibitors can critically influence the bioconversion of lignocellulose. The production of cellulases by microbial cells is governed by genetic and biochemical controls including induction, catabolite repression, or end product inhibition. Several efforts have been made to increase the production of cellulases through strain improvement by mutagenesis. Various physical and chemical methods have been used to develop bacterial and fungal strains producing higher amounts of cellulase, all with limited success. Cellulosic bioconversion is a complex process and requires the synergistic action of the three enzymatic components consisting of endoglucanases, exoglucanases and beta-glucosidases. The co-cultivation of microbes in fermentation can increase the quantity of the desirable components of the cellulase complex. An understanding of the molecular mechanism leading to biodegradation of lignocelluloses and the development of the bioprocessing potential of cellulolytic microorganisms might effectively be accomplished with recombinant DNA technology. For instance, cloning and sequencing of the various cellulolytic genes could economize the cellulase production process. Apart from that, metabolic engineering and genomics approaches have great potential for enhancing our understanding of the molecular mechanism of bioconversion of lignocelluloses to value added economically significant products in the future.