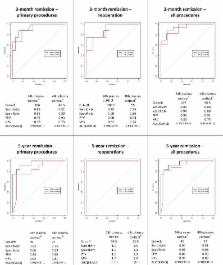 The present study evaluates the usefulness of an ACTH suppression test shortly after surgery, and to determine optimal cut-off values of included laboratory analyses, in predicting short- and long-term remission after surgery of Cushing’s disease.

A 48 h suppression test with betamethasone 2 mg/day applied after 45 transphenoidal adenomectomies in 28 patients was evaluated. Receiver operating characteristic (ROC)-curves were created for the included assays: plasma cortisol, plasma adrenocorticotropic hormone (ACTH) and urinary free cortisol (UFC). Plasma levels of cortisol and ACTH were measured both at 24 and 48 h. Youden’s index was used to determine cut-off with the highest sensitivity and specificity in predicting short- (3 months) and long-term (5 years or longer) remission. The area under curve (AUC) illustrated the clinical accuracy of the different assays.

A 48 h, 2 mg/day betamethasone suppression test after transphenoidal surgery of Cushing’s disease could predict short- and long-term remission with a high accuracy. Suppression of plasma cortisol after 24 h with betamethasone to values excluding Cushings disease in the diagnostic setting yielded the highest accuracy in predicting long-term remission.

F Fallo,  N Sonino,  M Boscaro … (2001)
During the past 30 years, there have been advances in understanding of the pathogenesis of Cushing's syndrome and in differential diagnosis of its various forms. Improved diagnostic tests and procedures have increased the ability to recognise even mild hypercortisolism and have provided the means to obtain an accurate diagnosis. Despite these advances, the occurrence of unusual clinical presentations and laboratory shortcomings may produce diagnostic problems and challenge clinical intuition. This article reviews recent pathogenic views, new tests, and new diagnostic problems in the evaluation of Cushing's syndrome. Atypical clinical presentations of hypercortisolism and some laboratory shortcomings that may confuse the diagnosis of Cushing's syndrome are also reported.

David Kennedy,  David R McCance,  Jonathan A. Atkinson … (2005)
There have been a few reports on long-term remission rates after apparent early remission following pituitary surgery in the management of Cushing's disease. An undetectable postoperative serum cortisol has been regarded as the result most likely to predict long-term remission. Our objective was to assess the relapse rates in patients who underwent transsphenoidal surgery in order to determine whether undetectable cortisol following surgery was predictive of long-term remission and whether it was possible to have long-term remission when early morning cortisol was measurable but not grossly elevated. Endocrinological factors associated with late relapse were also studied. We reviewed the long-term outcome in 63 patients who had pituitary surgery for the treatment of Cushing's disease between 1979 and 2000. Case notes were reviewed and the current clinical and biochemical status assessed. Our usual practice was that early after the operation, an 08:00 h serum cortisol was measured 24 h after the last dose of hydrocortisone. This was followed by a formal low-dose dexamethasone suppression test. Current clinical status and recent 24-h urinary free cortisol values were used as an index of activity of the Cushing's disease. If there was evidence suggesting relapse, a low-dose dexamethasone suppression test was performed. In many patients, sequential collections of early morning urine specimens for urinary cortisol to creatinine ratio were also performed in an attempt to diagnose cyclical and intermittent forms of recurrent hypercortisolism. We did this if there was conflicting endocrine data, or if patients were slow to lose abnormal clinical features. Mean age at diagnosis was 40.3 years (range 14-70 years). Mean follow-up up time was 9.6 years (range 1-21 years). Forty-five patients (9 males/36 females) achieved apparent remission immediately after surgery and were subsequently studied long term. Of these 45 patients, four have subsequently died while in remission from hypercortisolism. Ten of the remaining 41 patients have relapsed. Of those 10, six demonstrated definite cyclical cortisol secretion. Two of the 10 had undetectable basal serum cortisol levels in the immediate postoperative period. Thirty-one patients are still alive and in remission. Fourteen (45%) of the 31 who remained in remission had detectable serum cortisol levels (> 50 nmol/l) immediately postoperatively, and remain in remission after a mean of 8.8 years. Our relapse rate was therefore 10/45 (22%), after a mean follow-up time of 9.6 years, with mean time to relapse 5.3 years. The overall remission rate of 56% (35/63) at 9.6 years follow-up is disappointing and merits some re-appraisal of the widely accepted principle that pituitary surgery must be the initial treatment of choice in pituitary-dependent Cushing's syndrome. Following pituitary surgery, careful ongoing expert endocrine assessment is mandatory as the incidence of relapse increases with time and also with increasing rigour of the endocrine evaluation. A significant number of our patients were shown to have relapsed with a cyclical form of hypercortisolism.