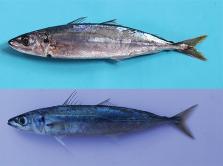 Decapterus macarellus and D. macrosoma are economically important pelagic fish species that are widely distributed in tropical and subtropical seas. The two species are often mistakenly identified due to their morphological similarities as described in the Chinese literature on fish identification. In this study, D. macarellus and D. macrosoma samples were collected in the Eastern Indian Ocean and the South China Sea and reidentified using morphological and DNA barcoding techniques. The characteristics that distinguish the two species primarily include the scute coverage of the straight portion of the lateral line (the most indicative characteristic for classification), the shape of the predorsal scaled area and its location relative to the middle axis of the eye, and the shapes of the posterior margin of the maxilla and the posterior margin of the operculum. The results revealed a large number of misidentified sequences among the homologous cytochrome oxidase (COI) sequences of the two species in the NCBI database and that the genus Decapterus may include cryptic species. In terms of genetic structure, the Sundaland has not blocked genetic exchange between D. macarellus populations in the South China Sea and the Eastern Indian Ocean, giving rise to a high level of genetic diversity. In this study, we made corrections to the Chinese classification standards for D. macarellus and D. macrosoma and the erroneous reference sequences in the NCBI database, thereby providing accurate reference points for the future exploration of cryptic species in the genus Decapterus .

K Tamura,  D. Peterson,  N. Peterson … (2011)
Comparative analysis of molecular sequence data is essential for reconstructing the evolutionary histories of species and inferring the nature and extent of selective forces shaping the evolution of genes and species. Here, we announce the release of Molecular Evolutionary Genetics Analysis version 5 (MEGA5), which is a user-friendly software for mining online databases, building sequence alignments and phylogenetic trees, and using methods of evolutionary bioinformatics in basic biology, biomedicine, and evolution. The newest addition in MEGA5 is a collection of maximum likelihood (ML) analyses for inferring evolutionary trees, selecting best-fit substitution models (nucleotide or amino acid), inferring ancestral states and sequences (along with probabilities), and estimating evolutionary rates site-by-site. In computer simulation analyses, ML tree inference algorithms in MEGA5 compared favorably with other software packages in terms of computational efficiency and the accuracy of the estimates of phylogenetic trees, substitution parameters, and rate variation among sites. The MEGA user interface has now been enhanced to be activity driven to make it easier for the use of both beginners and experienced scientists. This version of MEGA is intended for the Windows platform, and it has been configured for effective use on Mac OS X and Linux desktops. It is available free of charge from http://www.megasoftware.net.

Jeremy deWaard,  Rebecca L. Ball,  Monika Cywinska … (2003)
Although much biological research depends upon species diagnoses, taxonomic expertise is collapsing. We are convinced that the sole prospect for a sustainable identification capability lies in the construction of systems that employ DNA sequences as taxon 'barcodes'. We establish that the mitochondrial gene cytochrome c oxidase I (COI) can serve as the core of a global bioidentification system for animals. First, we demonstrate that COI profiles, derived from the low-density sampling of higher taxonomic categories, ordinarily assign newly analysed taxa to the appropriate phylum or order. Second, we demonstrate that species-level assignments can be obtained by creating comprehensive COI profiles. A model COI profile, based upon the analysis of a single individual from each of 200 closely allied species of lepidopterans, was 100% successful in correctly identifying subsequent specimens. When fully developed, a COI identification system will provide a reliable, cost-effective and accessible solution to the current problem of species identification. Its assembly will also generate important new insights into the diversification of life and the rules of molecular evolution.

Paul Hebert,  Paul Ward,  Jordan D. Ward … (2005)
Two hundred and seven species of fish, mostly Australian marine fish, were sequenced (barcoded) for a 655 bp region of the mitochondrial cytochrome oxidase subunit I gene (cox1). Most species were represented by multiple specimens, and 754 sequences were generated. The GC content of the 143 species of teleosts was higher than the 61 species of sharks and rays (47.1% versus 42.2%), largely due to a higher GC content of codon position 3 in the former (41.1% versus 29.9%). Rays had higher GC than sharks (44.7% versus 41.0%), again largely due to higher GC in the 3rd codon position in the former (36.3% versus 26.8%). Average within-species, genus, family, order and class Kimura two parameter (K2P) distances were 0.39%, 9.93%, 15.46%, 22.18% and 23.27%, respectively. All species could be differentiated by their cox1 sequence, although single individuals of each of two species had haplotypes characteristic of a congener. Although DNA barcoding aims to develop species identification systems, some phylogenetic signal was apparent in the data. In the neighbour-joining tree for all 754 sequences, four major clusters were apparent: chimaerids, rays, sharks and teleosts. Species within genera invariably clustered, and generally so did genera within families. Three taxonomic groups-dogfishes of the genus Squalus, flatheads of the family Platycephalidae, and tunas of the genus Thunnus-were examined more closely. The clades revealed after bootstrapping generally corresponded well with expectations. Individuals from operational taxonomic units designated as Squalus species B through F formed individual clades, supporting morphological evidence for each of these being separate species. We conclude that cox1 sequencing, or 'barcoding', can be used to identify fish species.