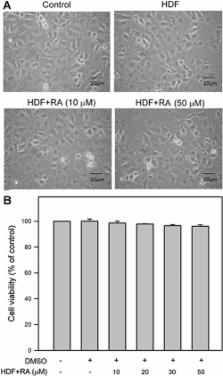 Chronic systemic inflammation and repetitive damage of vascular endothelia by incompatible dialysis system are probable causes of cardiovascular disease in patients on dialysis. The present study aimed to assess in vitro biocompatibility and anti-inflammatory effect of hemodialysis fluid supplemented with rosmarinic acid (RA) using human umbilical vein endothelial cells (HUVEC). HUVECs (5×10 6 cells/mL) were pre-exposed to 1 μg/mL of lipopolysaccharides (LPS) and incubated with RA-supplemented hemodialysis fluid (HDF). Cytotoxicity was assessed qualitatively by morphologic assessment and quantitatively by MTT assay. Expressions of proinflammatory mediators were assessed using quantitative real-time PCR and production of NO was quantified. Phosphorylation of AKT and nuclear localization of nuclear factor kappa B (NF-κB) were examined using western blotting. Exposure of HUVECs to RA-supplemented HDF had no influence on morphology and viability. Inhibition of proinflammatory mediator production in HUVECs by RA supplementation to HDF was significant in a dose-dependent manner. Exposure to RA-supplemented HDF resulted in a decrease in nitric oxide synthase expression and reduction of NO production in LPS-stimulated HUVECs. RA supplementation of HDF suppressed Akt activation in LPS-stimulated HUVECs. In addition, the level of cellular IκB was increased in parallel to a reduced nuclear translocation of NF-κB in LPS-induced endothelial cells. Our results suggest that RA-supplemented HDF is biocompatible and significantly suppressed inflammation induced in endothelial cells. In this respect, the use of HDF supplemented with RA could alleviate inflammation and improve long-term treatment of patients with renal failure on dialysis. Further clinical studies are required to confirm the effects.

Nicholas Leeper,  Bruce Gewertz,  Umesh Desai … (2002)
Elevated levels of interleukin-6 (IL-6) have been identified in a variety of systemic inflammatory states that are associated with endothelial barrier dysfunction, but the specific effect of IL-6 on endothelial permeability and the mechanism of action have not been fully examined. The current study evaluated the effect of IL-6 on endothelial permeability and on the distribution of the tight junctional protein ZO-1 and cytoskeletal actin. We also assessed the role of protein kinase C (PKC) in this process. Confluent monolayers of human umbilical vein endothelial cells (n = 6) were exposed to IL-6 (50-500 ng/ml) in the presence or absence of the PKC inhibitor Gö6976 (0.1 microM). Transendothelial electrical resistance (TEER) was measured at the onset of exposure and at 6-h intervals and compared with that of control cells using ANOVA with a Bonferroni multiple comparison test. Additional monolayers were exposed to IL-6, stained for ZO-1 and F-actin, and evaluated via fluorescence microscopy. Interleukin-6 increased endothelial permeability as measured by TEER in a dose- and time-dependent manner. In the presence of PKC inhibitor, the IL-6-mediated increase in permeability was attenuated (18-h TEER 73% of control with IL-6 exposure vs 95% of control with IL-6 + Gö6976 inhibitor, P < 0.01). Microscopy revealed that permeability changes were accompanied by a redistribution of the tight junctional protein ZO-1 and cytoskeletal actin, increased cell contraction, and disorganization of the intercellular borders. Conclusions. The inflammatory cytokine IL-6 is an important mediator of increased endothelial permeability via alterations in the ultrastructural distribution of tight junctions and morphologic changes in cell shape. PKC is a critical intracellular messenger in these IL-6-mediated changes. A better understanding of this mechanism should allow the determination of rational treatment strategies for endothelial barrier dysfunction which occurs in inflammatory states. (c) 2002 Elsevier Science (USA).

E V S B Sampaio,  J. Giglio,  Susana Pereira … (2005)
Many plants are used in traditional medicine as active agents against various effects induced by snakebite. The methanolic extract from Cordia verbenacea (Cv) significantly inhibited paw edema induced by Bothrops jararacussu snake venom and by its main basic phospholipase A2 homologs, namely bothropstoxins I and II (BthTXs). The active component was isolated by chromatography on Sephadex LH-20 and by RP-HPLC on a C18 column and identified as rosmarinic acid (Cv-RA). Rosmarinic acid is an ester of caffeic acid and 3,4-dihydroxyphenyllactic acid [2-O-cafeoil-3-(3,4-di-hydroxy-phenyl)-R-lactic acid]. This is the first report of RA in the species C. verbenacea ('baleeira', 'whaler') and of its anti-inflammatory and antimyotoxic properties against snake venoms and isolated toxins. RA inhibited the edema and myotoxic activity induced by the basic PLA2s BthTX-I and BthTX-II. It was, however, less efficient to inhibit the PLA2 activity of BthTX-II and, still less, the PLA2 and edema-inducing activities of the acidic isoform BthA-I-PLA2 from the same venom, showing therefore a higher inhibitory activity upon basic PLA2s. RA also inhibited most of the myotoxic and partially the edema-inducing effects of both basic PLA2s, thus reinforcing the idea of dissociation between the catalytic and pharmacological domains. The pure compound potentiated the ability of the commercial equine polyvalent antivenom in neutralizing lethal and myotoxic effects of the crude venom and of isolated PLA2s in experimental models. CD data presented here suggest that, after binding, no significant conformation changes occur either in the Cv-RA or in the target PLA2. A possible model for the interaction of rosmarinic acid with Lys49-PLA2 BthTX-I is proposed.