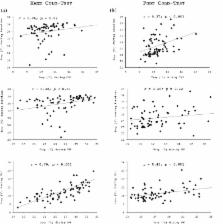 The purpose was to examine whether associations exist between temperature responses in the fingers vs. toes and hand vs. foot during local cold-water immersion and rewarming phases.

Results suggest that there is generally a lower temperature in the toes than the fingers after a short time of local cold exposure and that the thermal responses of the fingers/hands are not readily transferable to the toes/foot.

Straightforward statistics for the behavioral sciences

R. Callister,  K Kregel,  Douglas R. Seals (1992)
1. Our aim was to determine the relationship between efferent sympathetic nervous system activity to skeletal muscle (MSNA) and both the dynamics of the stimulus and pain sensation during localized skin cooling in humans. MSNA in the lower leg (peroneal microneurography), heart rate, arterial blood pressure, hand skin and muscle temperatures and perceptions of pain were recorded in ten healthy subjects before, during and after immersion (3 min) of a hand in water of different temperatures ranging from non-noxious to extremely noxious (28, 21, 14, 7 and 0 degrees C). 2. Immersion produced an abrupt, water temperature-dependent fall in hand skin temperature (initial 30 s) followed by a more gradual decline. In contrast, the fall in hand muscle temperature was almost linear during immersion. Throughout immersions at the 28, 21, and 14 degrees C water temperatures and during the initial phase of the 7 degrees C level, sensations ranged from not painful to somewhat painful; however, the latter phase of the 7 degrees C immersion and the entire 0 degrees C level were perceived as intensely painful. 3. During the initial 15-30 s of immersion at the 21-7 degrees C water temperatures, MSNA decreased from control levels in all subjects (47-58% on average, P < 0.05), whereas mean arterial blood pressure did not change. MSNA then returned to and remained at control levels throughout the 28-14 degrees C immersions, although arterial pressure, primarily systolic, rose slightly. 4. After some delay, MSNA increased during immersion at both the 7 degrees C (P < 0.05 at 90 s) and 0 degrees C (P < 0.05 at 60 s) levels in a progressive, water temperature-dependent manner, achieving peak values of approximately 200 and 300% of control, respectively, by 2.0-2.5 min. These elevations in MSNA were associated with parallel increases in arterial pressure. 5. Heart rate rose during the onset of immersion at all water temperatures (P < 0.05), but fell rapidly to control levels after 60-90 s. The increases were small (approximately 5 beats/min) and similar at the 28-7 degrees C levels, but were twice as great at the coldest water temperature.(ABSTRACT TRUNCATED AT 400 WORDS)

Contribution of thermal and nonthermal factors to the regulation of body temperature in humans.

Ola Eiken,  Igor B. Mekjavic (2006)
The set point has been used to define the regulated level of body temperature, suggesting that displacements of core temperature from the set point initiate heat production (HP) and heat loss (HL) responses. Human and animal experiments have demonstrated that the responses of sweating and shivering do not coincide at a set point but rather establish a thermoeffector threshold zone. Neurophysiological studies have demonstrated that the sensor-to-effector pathways for HP and HL overlap and, in fact, mutually inhibit each other. This reciprocal inhibition theory, presumably reflecting the manner in which thermal factors contribute to homeothermy in humans, does not incorporate the effect of nonthermal factors on temperature regulation. The present review examines the actions of these nonthermal factors within the context of neuronal models of temperature regulation, suggesting that examination of these factors may provide further insights into the nature of temperature regulation. It is concluded that, although there is no evidence to doubt the existence of the HP and HL pathways reciprocally inhibiting one another, it appears that such a mechanism is of little consequence when comparing the effects of nonthermal factors on the thermoregulatory system, since most of these factors seem to exert their influence in the region after the reciprocal cross-inhibition. At any given moment, both thermal and several nonthermal factors will be acting on the thermoregulatory system. It may, therefore, not be appropriate to dismiss the contribution of either when discussing the regulation of body temperature in humans.